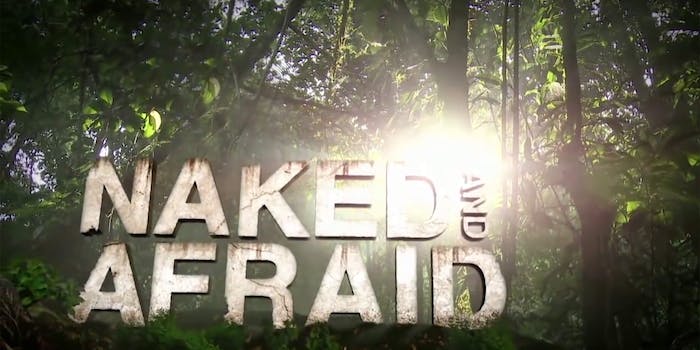 How to stream ‘Naked and Afraid’

It's exactly what it says it is.

Imagine you and a member of the opposite sex are stripped down to your birthday suit and dropped in a remote location. Could you survive for 21 days? The contestants on Naked and Afraid are crazy enough to think they can.

After picking out their favorite survival item, like a lighter or a machete, the couples are dropped in a harsh terrain to see if they can rough it out for 21 days. They’ll be completely exposed to the elements, harsh environments, and occasionally wildlife. Completely exposed is quite literally here, considering they’re totally nude. Can each couple rough it, or will they give in to the cruel strains of Mother Nature?

Here’s everything you need to know to stream Naked and Afraid.

What is Naked and Afraid?

How to stream Naked and Afraid

Discovery Channel is available on a few of the major live TV streaming services. When trying to decide which one is best for you, you’ll want to weigh the cost, the other channels you’ll receive, and the compatible devices for streaming.

Naked and Afraid on Philo

Philo is a budget-minded streaming service, and depending on what channels you want, it might be right for you. The 59 Philo channels lean decidedly toward entertainment; the Philo channel list includes AMC, Discovery, IFC, Lifetime, and the Paramount Network, all for $20 a month. If you’re a fan of Naked and Afraid, you’re in luck: You can find it on Philo. Philo also comes with free cloud DVR, but shows recorded are deleted after 30 days, so binge responsibly.

Naked and Afraid on Hulu with Live TV

Naked and Afraid on FuboTV

To stream Naked and Afraid, you’ll want to dock in at the FuboTV Standard level.

Naked and Afraid on Sling TV

Naked and Afraid on Vidgo

If you’re looking to stream Naked and Afraid, know that you can stream it on YouTube TV.