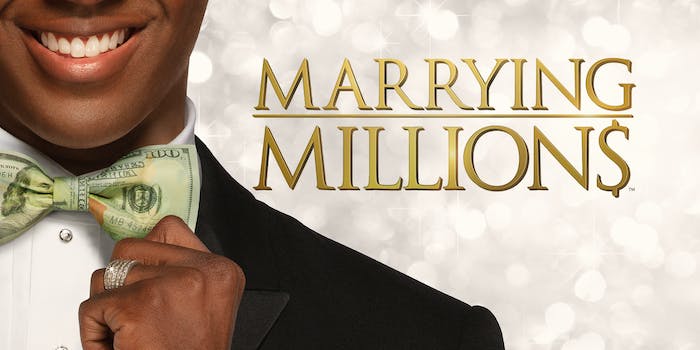 How to stream ‘Marrying Millions’

Can a wealthy person every really experience true love? Marrying Millions is a case study in the rich and their never-ending case for romance.

The reality series takes folks who have everything but a loving partner and pairs them with someone on the opposite end of the economic scale. What follows is exactly what you’d imagine. Rich and poor participants alike get scrutinized by their families, friends, and the world, to see if their love can survive across massive economic scales. Some will find their storybook wedding. Others will be thankful that they signed a prenup.

Here’s everything you need to know to stream Marrying Millions.

What is Marrying Millions?

The reality show premiered in the summer of 2019, and became an almost immediate hit. Of the six couples featured in season 1, two are still married, three are dating, and one broke off their engagement.

“The show is all about the lovebirds getting acquainted with each other’s world. It, therefore, seems a bit odd that Megan has been with Sean for over five years, and is yet to get accustomed to the caviar-and-private jet-life. However, she certainly does not seem to mind being taken around the world, and Sean spending months to get the perfect ring for her. Perhaps having had the taste of this new world is what is keeping her from signing a prenuptial agreement. After all, when you grow up with nothing, you do not want to be thrust into that kind of life again.” –Aiden Mason, TVOverMind

How to stream Marrying Millions

Philo is a budget-minded streaming service, and depending on what channels you want, it might be right for you. The 59 Philo channels lean decidedly toward entertainment; the Philo channel list includes AMC, Discovery, IFC, Lifetime, and the Paramount Network, all for $20 a month. If you’re a fan of Marrying Millions, you’re in luck: You can find it on Philo. Philo also comes with free cloud DVR, but shows recorded are deleted after 30 days, so binge responsibly.

Lifetime on Hulu with Live TV

Hulu Live TV sets you up with local channels and has a broad spectrum of entertainment and sports channels to review, including the full suite of ESPN channels, Cartoon Network, FX, HGTV, and even deep cuts like National Geographic and Syfy, and of course, Lifetime where you can stream Marrying Millions.

To watch Marrying Millions, you’ll want to dock in at the FuboTV Standard level.

If you’re looking for a streamlined, cost-effective streaming package, check out Sling TV. It offers two basic cable packages, Sling Orange and Sling Blue, each of which costs $30 per month. There’s also the third option of getting Sling Orange + Blue for just $45 per month. You’ll get more Sling TV channels by choosing Sling Blue, with its 40 channels including sports favorites like FS1and NBCSN and cable mainstays like Food Network and Discovery Channel. But Sling Orange brings must-haves Disney Channel and ESPN as part of its package. To gain access to Lifetime, you’ll either need Sling Blue, Sling Orange, or Sling Orange + Blue. Sling also has a number of add-ons, including robust international packages organized by languages all over the globe.

Vidgo offers a package for under $40 a month that pulls together more than 60 English-language channels into its National English Package. Vidgo channels include ABC, Fox, the ESPN family of channels (including ESPN Deportes), and it’s one of the few streaming services that carries BeIN Sports. But it’s like Fubo in that, even though it started out for streaming sports, it carries a lot more now. You might be surprised to know that Vidgo’s an option to stream Lifetime—and then you chat about it online via Vidgo’s Social TV platform.