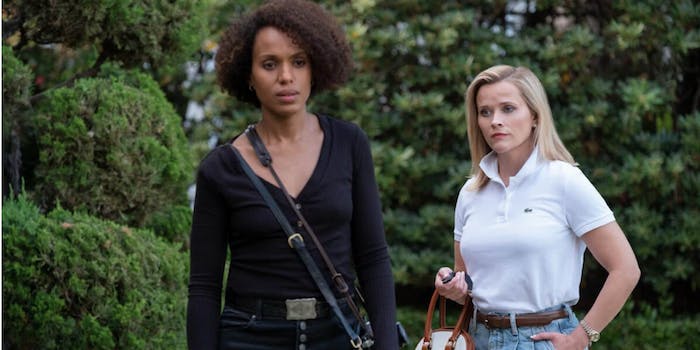 The series could use a little levity.

Little Fires Everywhere is Hulu’s latest book-to-series adaptation, a rendering of motherhood as a mirror and a provocation.

Based on Celeste Ng’s 2017 bestseller, Little Fires Everywhere is a period piece—set in 1997—and a character study. In the very first scene, we see Elena Richardson (Reese Witherspoon) helplessly watching her beautiful suburban home burn, which immediately sparks our interest. That flame gets dimmer on the journey to “why.”

Witherspoon’s Elena is a snowbelt version of her Big Little Lies character, an ambitious, coiffed steamroller of status quo. But it was also a bit of fate: Ng told Bustle she was watching Big Little Lies in 2017, saw the parallels between Witherspoon’s Madeline Martha Mackenzie and the book’s Elena, and wondered aloud if the actress would ever adapt her book. (Witherspoon and Kerry Washington are also executive producers.)

It’s a bit of fate that brings Mia Warren (Washington) and her daughter Pearl (Lexi Underwood) into Elena’s orbit; after noticing the two living out of their car (and calling the cops), she rents them a duplex—her white guilt writ large. The series, like the book, is set in Shaker Heights, Ohio, where Ng grew up. She told the New York Times it’s a place that’s “very socially oriented and race-conscious, yet still had blind spots.” That’s distilled in the tension between the two women, illustrated early on when Elena offers Mia a job in her home and doesn’t quite realize why that’s offensive.

Elena’s a Type A mother of four teenagers who color-codes her calendar and measures out servings of wine. She and lawyer husband Bill (Joshua Jackson) live in a stately home and have planned sex nights. Mia, an artist and photographer, makes a living off odd jobs and smokes pot freely; she and Pearl never stay in one place long, and it’s understandably starting to wear on her teenage daughter. Elena and Mia are diametrically opposed, which neatly sets up the bigger conflict—a custody battle over an adopted child that shakes up the status quo, complicated by Mia’s own past.

Little Fires Everywhere embraces a soap-opera format where you can see dramatic confrontations coming from a mile away, but the mom-flict can’t sustain the whole narrative. Struggling to be more interesting is a subplot involving the teens of LFE: Youngest Izzy (Megan Stott) is most at odds with her rules-driven mother, and in turn is drawn to the more liberated Mia. Pearl, looking for normalcy, is absorbed into the Richardson family, falling into Izzy’s place on the couch. Oldest daughter Lexie (Jade Pettyjohn) co-opts Pearl’s life experience for her own college admissions essay, unsure what in her life qualifies as a hardship and unwilling to dig deeper to find it.

The series does put you in that hazy time before cell phones, when parents had a more vague idea where their kids were. It also really reminds you it’s 1997: Alanis Morissette’s “Uninvited” scores one tense montage; in another, an AOL chat is set to Garbage’s “Only Happy When It Rains.” There are references to Lilith Fair and The Real World: Boston. And there’s a slowed-down version of Meredith Brooks’ “Bitch” that comes on like a white-wine headache. None of this really adds to the narrative.

It also connects to the present, in part because of its inclusive writers’ room. Little Fires Everywhere does a lot with themes of erasure and assimilation—in terms of race and sexuality—as well as class, privilege, and motherhood. There are episodes devoted to Elena and Mia as younger women: Elena’s is a bit hit-and-miss but we learn more about the experiences that shaped Mia in early ‘80s NYC—including an intimate relationship with her professor (Anika Noni Rose). Though Washington plays a woman struggling to contain her past, she wears Mia’s pain less like a mask, more like a canvas.

Still, that backstory doesn’t really expand Mia and Elena beyond their carefully drawn characters. An emotional moment between Izzy and Mia late in the series (seven out of eight episodes were offered for review) comes close, but as the drama starts coming at a faster clip, it highlights the need for more humor or levity or… catty moments. Have I just been spoiled by Renata Klein?

Like Big Little Lies season 2, Little Fires Everywhere also involves a court scene in which a mother’s capacity to care for a child is debated, though the context is much different. The series tells us a lot about women’s experience (or at least these two women’s, and throughout the show it’s hard to forget it’s Witherspoon and Washington in the roles) but doesn’t exactly address the deeper rage, misogyny, and systemic injustice behind the mirror.