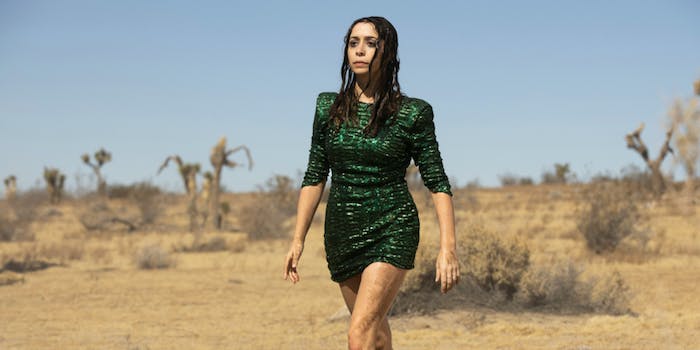 Milioti sure knows how to work an alternate reality.

Has Cristin Milioti been trapped in a series of horrifying alternate realities since Black Mirror’s “U.S.S. Callister”? It’s easy to paint Made for Love, the new HBO Max series adapted from Alissa Nutting’s novel, in that light. She plays Hazel, a woman trapped in a spotless, soulless “Hub” with her tech entrepreneur husband, Byron Gogol (Billy Magnusson).

And the chip that has been implanted in Hazel, so that “Our minds will be one,” as Byron explains, certainly seems like the kind of tech that can be easily satirized. But at the heart of Made for Love—also the name of the mind-meld program Byron created—is a deeper question about how you lose yourself in a relationship, and what constitutes love.

In the four episodes out of eight made available for review, we see how Hazel went from a resourceful small-time scammer to a woman whose orgasms are turned into hard data, every part of her life a performance review. After 10 years, she has become, as her husband says, a valuable piece of technology. Milioti is an accomplished face actor, able to shift from agreeable to eat-shit-and-die with just a blink.

Byron is the narcissistic tech guy writ large, and Magnusson plays him with sociopathic precision: He sleeps only two hours, doesn’t eat actual food, and also hasn’t left the “Hub” in 10 years. Byron isn’t physically abusive but his entire being is devoted to monitoring Hazel, in a way that reads as textbook abuser behavior. Does his constant surveillance actually help him understand his wife, or give him any insight into being a woman? That doesn’t appear to be his goal.

We see that Hazel’s father, Herbert (Ray Romano), was stricken by grief and alcoholism after the death of her mother, and therefore emotionally unavailable in her childhood. After she escapes her orgasm prison and seeks refuge with him, she meets with Diane, the “synthetic partner” Herbert now lives with, and a mordant mirror of her own situation. In these scenes we get a little more context for where Hazel grew up—a dusty desert town nearly as isolating as the “Hub.”

Milioti’s strong performance pulls the series away from just “critique of modern dystopia.” However, Made for Love—or at least the first half—doesn’t quite commit to the bigger picture. We obviously want Hazel to be free, but the series doesn’t give the full scope of the last decade of her life. Yet.

Made for Love is now streaming on HBO Max.