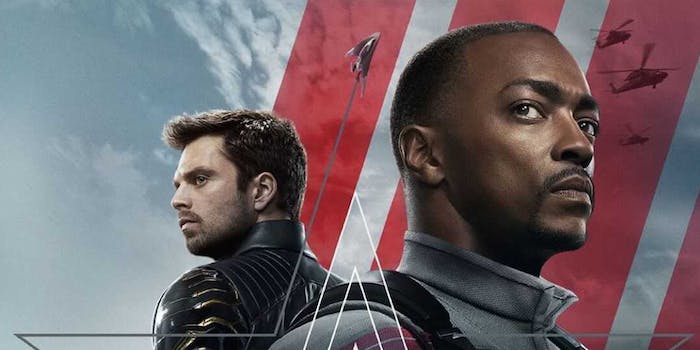 How to stream ‘The Falcon and the Winter Soldier’

One is an Air Force rescue man with the power of flight. The other is a previously brain-washed assassin and Captain America’s best friend. Together, they must unite the world in a post-Endgame universe in The Falcon and the Winter Solider.

Steve Rogers is officially hanging up his shield. This makes way for a new Captain America to carry on his legacy. As this image of American exceptionalism makes his debut, a new enemy follows. The Flag-Smashers are an anti-patriotism terrorist organization hell bent on causing strife and disorder on a worldwide scale. Falcon and Bucky Barnes must team up, test their abilities, and take down this new threat.

Here’s everything you need to stream The Falcon and the Winter Soldier.

What is The Falcon and the Winter Soldier?

The Falcon and the Winter Soldier Reviews

How to stream The Falcon and the Winter Soldier

The Falcon and the Winter Solider is available exclusively through Disney+.

Disney+ offers one of the most beloved libraries of streaming content online. Namely, 500 Walt Disney Studios movies and 7,000 episodes of Walt Disney Television. It also includes selections from Pixar, Marvel, Star Wars, and National Geographic. They’re all members of the Disney family. There’s also 30 seasons of The Simpsons. Plus, like any streaming service worth its salt, there are exclusive original production. These include Lady and the Tramp, Wandvision, Monsters at Work, and The Mandalorian. One subscription works on up to four devices, and you can even download content directly to your device to watch anytime.