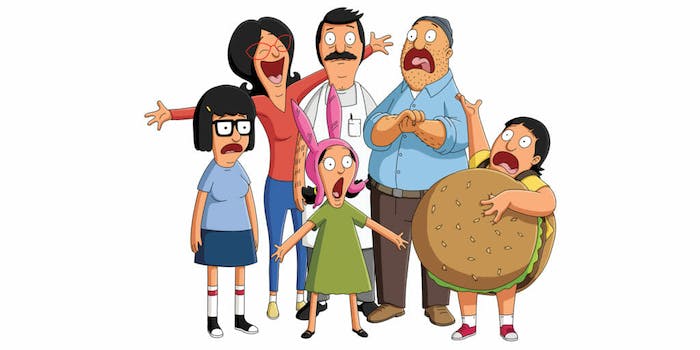 How to stream ‘Bob’s Burgers’

Who doesn't love the Belcher clan?

Only a select few animated television families achieve legend status. It’s safe to say that with Bob’s Burgers entering its 10th season, the Belchers have officially cracked the echelon that includes the Hills, the Griffins, and of course, the Simpsons. And despite the fact that Sunday nights on Fox are pretty crowded when it comes to animated comedies, Bob’s Burgers is a brand all its own. It’s the kind of funny that’s pretty far-flung from the rest of the pack. If the charming “Burger of the Day” puns don’t win you over, the Belcher clan will.

For the uninitiated, the show revolves around Bob Belcher, the long-suffering burger restaurant owner. He’s a husband to Linda and the father of Tina, Louise, and Gene. He’s voiced to the nines by (who else?) the king of dry comedy, H. Jon Benjamin. Or, you know, “the guy from the Arby’s commercials.”

Here’s everything you need to know to stream Bob’s Burgers.

What is Bob’s Burgers?

Animator Loren Bouchard wanted to do an animated comedy focusing on a working-class family. Originally, the show was much darker, with the Belchers being cannibals. The show premiered in January of 2011 and has gone on to 10 seasons.

How to stream Bob’s Burgers

Fox is available on a few of the major live TV streaming services. When trying to decide which one is best for you. You’ll want to weigh the cost, the other channels you’ll receive, and the compatible devices for streaming.

To watch Bob’s Burgers, you’ll want to dock in at the FuboTV Standard level.