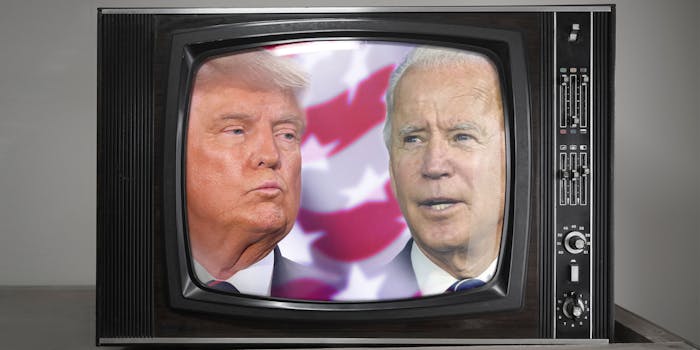 Where to stream 2020 US Election Results

After one of the most tumultuous election seasons in recent American history, Election Day is finally here. President Donald J. Trump and Vice President Joseph R. Biden square off for the highest office in the land. Who will be the first to clock in 270 electoral votes?

Here’s everything you need to know to stream the 2020 US Election results.

Which channels will carry the 2020 election results?

Looking to catch the 2020 election results as they come in? These are the channels covering the U.S. election.

You’ll also have options via PBS (through Amazon Prime Video), Roku, and YouTube as well.

Not sure what to be on the lookout for as you tune in this evening? Check out our guide to get an idea of what’s likely to go down once polls close.

Hulu Live TV sets you up with local channels and has a broad spectrum of entertainment and sports channels to review, including the full suite of ESPN channels, Cartoon Network, FX, HGTV, and even deep cuts like National Geographic and Syfy. You can stream CNN, Fox News Channel, and MSNBC on Hulu Live TV, as well as the local channels you usually get. It’s primed for you to find your preferred 2020 U.S. election results live stream.

You can find a 2020 U.S. election results live streaming on CNN through Sling Orange. Sling Blue will stream the Vice Presidential debate via CNN, Fox News, and MSNBC. If you use Sling with Air TV, you’ll also have access to your local channels; check out our Sling TV guide for more on that.

With the exception of C-SPAN and CNN, you have plenty of options for a 2020 U.S. election results live stream.

If you’re already looking to AT&T for your wireless needs, you might consider AT&T TV Now to cover streaming for you. AT&T TV Now channels start with Plus and Max, which even include HBO. Then, AT&T plans expand from there, approaching cable selection and pricing with AT&T TV Now’s biggest packages. AT&T streaming also comes with Cloud DVR, letting you record up to 20 hours of TV per month. Even C-SPAN’s available to stream 2020 U.S. election results on AT&T TV Now. If there’s a channel you want, there’s likely an AT&T TV Now plan that will get it to you.

If you’re looking for a 2020 U.S. election results live stream, you have options galore on YouTube TV.

Vidgo offers a package for under $40 a month that pulls together more than 60 English-language channels into its National English Package. The package of Vidgo channels include ABC, Fox, and the ESPN family (including ESPN Deportes). It’s also one of the few streaming services that carries BeIN Sports. But it’s like Fubo in that, even though it started out for streaming sports, it carries a lot more now. Vidgo not only offers options for 2020 U.S. election results live streaming, it provides a Social TV platform that lets you voice your thoughts to other Vidgo streamers.