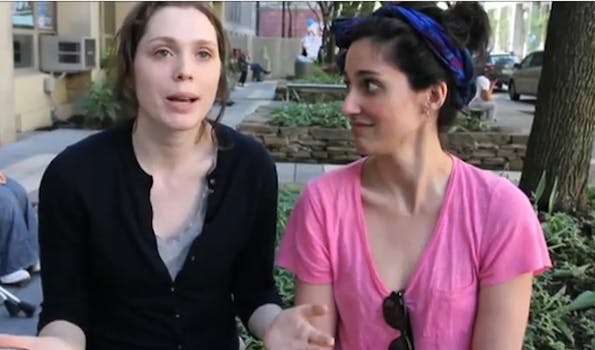 They went there: “Shit Girls Say About the Show ‘Girls’”

Girls, a new show that is just easier to describe as Sex and the City set in Brooklyn, ignited a firestorm of criticism online last week and finally put blogger’s creative writing and cultural criticism degrees to work. A lot of opinions were made by seemingly anyone who can form a sentence and much of it was negative.

Is the show racist? (Maybe!) Was it greenlighted because all the, well, girls, are spawns of famous parental units? (Probably!) And, do we really need another show about how hard it is to grow up in New York City? (Sure!)

Anyway, the Internet’s think-piece machinery worked overdrive, and since there was no more words to use, it was time to encapsulate everyone’s thoughts into video form. Enter “Shit Girls Say About the Show ‘Girls’.”

The two-minute clip perfectly frames the criticism, the confusion, and the bewilderment as to why much of the show is set in their bathrooms. Since its posting Thursday, it has racked up more than 9,700 views.

The two dozen girls who appear in the video mock the show’s relatability (“It’s like they broke into my house and filmed my life,” a girl deadpans), wonder what’s the deal the show’s 25-year-old creator Lena Dunham, and debate the show’s lack of color. “There’s like an Asian girl…photoshopped,” one said.

I think we need another thinkpiece dissecting the merits of this video.