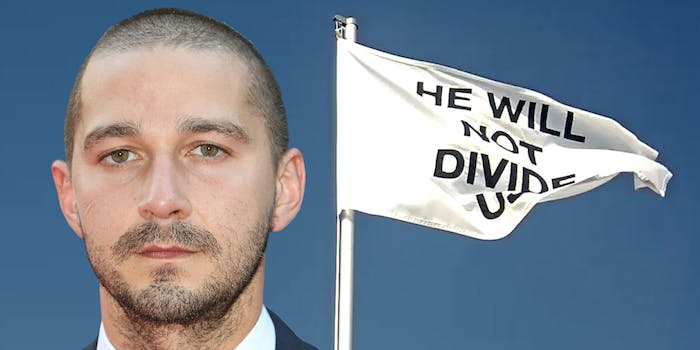 The site was targeted with a common white supremacist code.

Shia LaBeouf‘s He Will Not Divide Us project has been shot at, vandalized, and targeted by internet trolls. Now the project’s website has been vandalized as well.

According to USA Today, on Monday the website looked a little different. It reportedly included a new name and the numbers 14/88, a “common white supremacist code,” according to the Southern Poverty Law Center. As of Tuesday, the website has reverted back to its original homepage.

He Will Not Divide Us launched on Inauguration Day, and initially served as a livestream of anti-Trump protesters, including LaBeouf. In February, LaBeouf was arrested after getting into an altercation with another participant. A white supremacist previously mentioned 14 and 88 during a livestream.

The project is slated to last the length of Trump’s presidency. As of March 22, the Foundation for Art and Creative Technology in Liverpool has taken in the project.