'I cannot believe it worked.'

Adding new meaning to getting in where you fit in, an English teen found a way into a gig’s VIP area. Like many before him, he managed to fool security into believing he was with the band—though he did it by changing the band’s Wikipedia page. 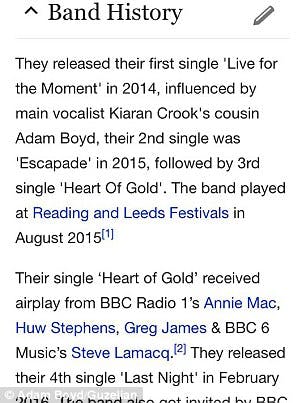 Adam Boyd of Crewe, U.K., and his friends went to see emerging indie rock band the Sherlocks, at Manchester’s Albert Hall. After arriving late, and suffering through a terrible view during the supporting act, Boyd figured he’d take a shot at the VIP section.

MANCHESTER!!! NO WORDS.
THANK YOU! ❤ pic.twitter.com/FQbdN0WOqO

“The Wikipedia idea came about due to my frustration of not being able to see any of the supporting band and worrying if I’d have the same problem with the Sherlocks when they came on,” Boyd told the Daily Mail.

The page’s edit history corroborates his wild story. Boyd didn’t stay long, ending up downstairs with his friends, living to tell the well-executed tale on Facebook.

Here’s the band’s latest, “Will You Be There?”: