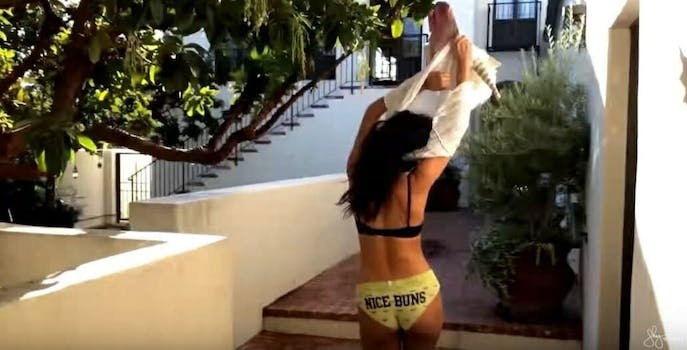 The reactions from passersby are priceless.

As Shay Mitchell approached 3 million subscribers on YouTube, she vowed to her assistant, Sammy, that when she hit that momentous occasion, she would strip down and run around her neighborhood naked. Mitchell reached that milestone last week—and Sammy didn’t forget the promise.

Which led to Mitchell’s latest video, where she sheds her clothes and hightails it around her block without any clothes (and donning a unicorn mask to protect her identity—until she posted the video, that is).

The image of a YouTube star hustling up and down the sidewalk sans clothes is funny. But the looks she gets from the people she encounters are priceless.

Just in case you’re worried, this is mostly SFW.

Considering Mitchell has already received nearly 2 million pageviews since posting the vlog on Friday—and added about 24,000 subscribers since then, far above her daily average—fans seem really interested to see what she plans when she gets to 4 million subscribers.