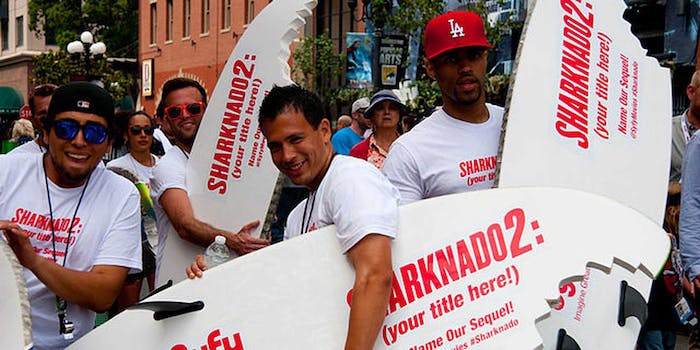 The ‘Sharknado’ sequel is coming, but how can it top the first one?

The sharknado hits NYC in the sequel to SyFy channel's cheesy hit movie.

Big news on the Sharknado front: Ian Ziering and Tara Reid will reprise their starring roles from the original Sharknado as an estranged couple whose lives are torn asunder by improbable storms full of sharks. Except this time, the sharks will ‘nado around New York City.

The SyFy channel held a contest last summer to name the sequel on Twitter, resulting in the forthright (yet perhaps too plain) title of Sharknado 2: The Second One.

Daily Dot writer Aaron Sankin would like to rename the film Sharknado 2: The Sharkening and add the tagline “It’s getting shark in here.” I’d prefer to rename it Sharknado 2 Fast 2 Sharkious and recast Vin Diesel in Ian Ziering’s role, but life’s not fair.

Apart from the location change to New York City, not much is known about the plot. While we wait for the summer of 2014 to see the second sublimely kitschy shark flick, here’s a list of possible plot-lines:

There is another Sharknado, and…

If you think about it, is any of that really more absurd than the concept of a sharknado in the first place?