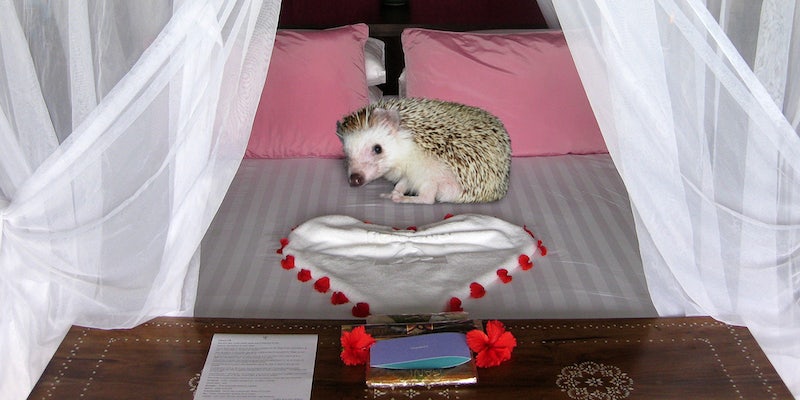 I can’t stop thinking about Hedging His Bets, the most bizarrely sexy ebook on Amazon.

Yup, you read that right. Werehedgehogs.

I wanted to find out if, first and foremost, hedgehogs—those cute little prickle baskets that float in bathtubs and curl up in tiny balls—could actually be sexy. I found out a lot more than that. 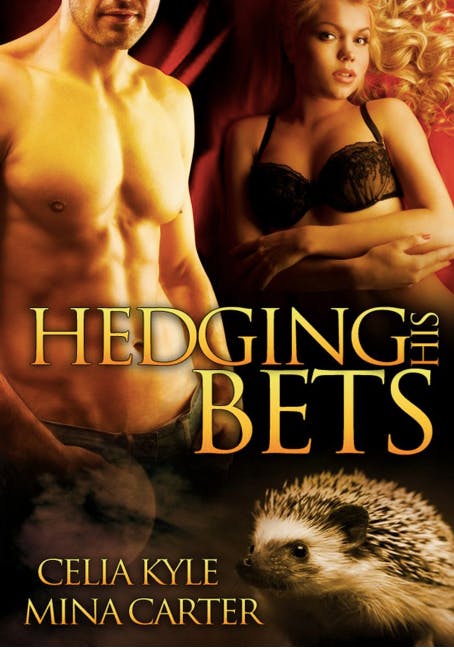 In the immaculately named Hedging His Bets—which Kyle cowrote with author Mina Carter—Blake Carlisle (aka “bad-boy Blake Carlisle”) is a big, badass biker bro… with a secret.

Blake was a shape shifter, yes, but he preferred to remain in his human form because the fates were bitches with a twisted sense of humor. … Blake was a werehedgehog.

Men and women transform into animals—both literally and in the bedroom.

Shapeshifting isn’t unusual in Blake’s small town, but his particular spirit animal isn’t a point of pride for the strapping, leather-clad man. When Blake gets in touch with his animalistic nature, he turns into a prickly, adorable little creature—a “hedgie,” as the book repeatedly calls them.

Blake’s unrequited “mate” is Honey, the “Amazonian” owner of the local bar and grill and mother to three rescue hedgehogs.

Plopping down on the floor, she opened the cage and lifted each of them out. She rolled around on the ground making yipping noises, mimicking them to the best of her ability, and just playing with the cute little things. … Who needed a man when she had hedges?

It’s clear that Blake and Honey are meant to be together—because she loves hedgehogs and he loves rubenesque beauties. Also, because the book tells as much and then lets us in on each of their super-horny inner monologues (there is much dampness and/or throbbing between thighs and the word “ministrations” is used with abandon).

The heat of her flush drifted toward him, but so did something else. Something musky and delicious that called to his inner beast. 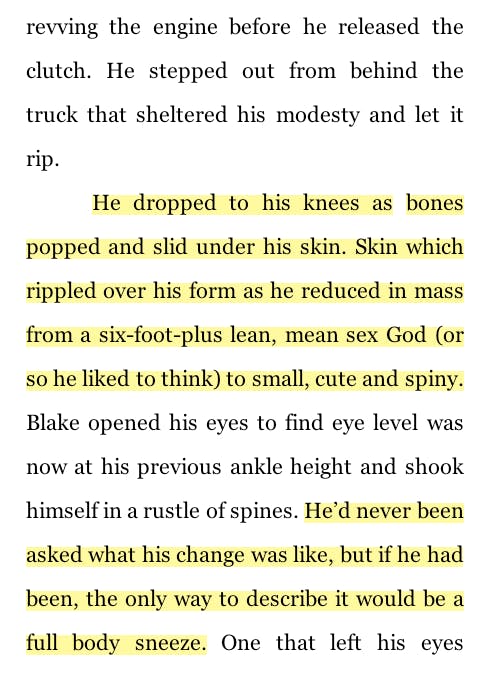 That inner beast being a hedgehog.

But it’s not magic or witchcraft or even a mean, hungry cat that keeps these two apart—it’s something eminently more relatable: insecurity.

Honey fears that, despite his seriously unceasing and not remotely subtle advances, Blake would actually reject her extra-curvy self, which causes her to preemptively reject him, time and again. Muscular bad-boy (don’t forget!) Blake isn’t without fear either. He worries that Honey wants a more staid type of man.

She was probably into Mr. Sensible Sales Executive. Mr. Two Point Four Children with a nice family sedan and a pension plan. Not a shifter with a bad rep and a penchant for powerful bikes.

But despite Honey’s rejections, low-self-esteem, and frequent crying, Blake hatches a plan to appeal to her maternal, caring side.

He dropped to his knees as bones popped and slid under his skin. Skin which rippled over his form as he reduced in mass from a six-foot-plus lean, mean sex God (or so he liked to think) to small, cute and spiny. 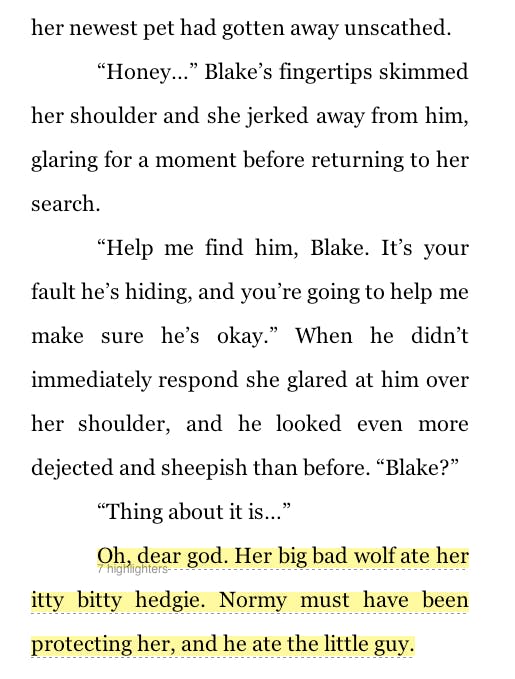 Blake shifts form and lets his fellow werehedgie, Katie—Honey’s employee and only friend—give him a beating for the ages. Then, he parks his injured little self next to Honey’s car, waiting for her to find and rescue him. When she does, she names him “Normy” and he wastes no time settling right into her cleavage.

No spoilers, but after a veterinary appointment with a miniature rectal thermometer, a far-flung hedgie, a ruined date, and a super-nude misunderstanding, Blake finally reveals his true nature to Honey.

“I’m Norman. I’m…” He swallowed hard, Adam’s apple sliding along his neck. “I’m a werehedgehog. I sorta made sure you rescued me.”

After a few more tortured chapters of accusations and mistrust and anger and motorcycle accidents, Blake and Honey can’t contain their passion any longer and consummate their love in a train-blush-inducing and (thankfully) entirely human sex scene.

A hedgehog fit in her palm. Blake? Hell, she didn’t think that his dick would fit in her hand, let alone the rest of him… Honey had turned into a werehedgehog whore.

Despite being only pounds in his hedgie form, he was all male baby. His beast side, his hedgie, clamored at him to drive his cock deep.

That satisfaction is exactly what the scores and scores of online erotica can provide—and best of all, provide quickly. If you’re going to eat junk food, you want it to hit the spot as soon as possible. Although “my biker boyfriend turns into a tiny hedgehog and I have chronically low self-esteem due to socially regulated beauty standards” might seem like an insurmountable set of problems, watching two characters hash them out in under 70 pages is its own reward.

Romantic Bookaholic promises, “This is a short book … perfect for that random hour.”

Over on Amazon, many of the reviews rave over how “cute” or “hot” or even “funny” the book is, and some complain that the tome isn’t long enough, but just as many praise the length or ease of reading. “Short, sweet easy read and sexy hot,” Dina Flores gushes, while Romantic Bookaholic promises, “This is a short book that is perfect for that random hour.” Rebecca D recommends it “if you just want a quick, easygoing read.”

Online erotica hits the spot fast, and then over and over, just the way we want it.

Shapeshifter romances speak to a common fear—that there is something weird or scary inside of us. Beautifully, they provide a reassurance that it’s precisely that hidden shame that makes us most appealing. As much as Blake’s shifter status is part of his truest self, Honey’s weight is part of hers, and that is what makes them perfect for each other.

These stories follow a few variations on a formula. This one could be summed up as: shapeshifter meets mate, shapeshifter cannot be with mate due to outside circumstances and/or internal conflict, shapeshifter concocts elaborate plot for seduction that includes shapeshifting, shapeshifting seduction plot goes terribly awry, catastrophic event occurs but the ensuing honesty, communication and understanding lead to boning. The art of these books isn’t found in the prose, but by combining a formula and a message that readers crave and delivering on them in a way that’s endlessly satisfying. Ultimately, it’s the climax—literally, that joyously realized, soulmate-level sex—that we have all been waiting for.