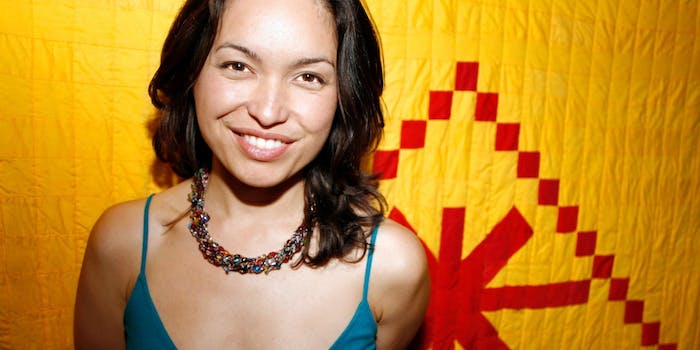 Sex positive podcaster Sandra Daugherty has some Valentine’s Day advice that Parks and Recreation’s Tom Haverford would approve of: “Treat yourself!”

Out of the entire stable of podcasters distributed by Nerdist Industries, Daugherty is almost certainly the one who most recalls the style of equally jocular and enthusiastic Nerdist host and mastermind Chris Hardwick.

A graduate of California State University’s broadcast journalism program, Daugherty has worked as a sex educator and taught workshops at Los Angeles’s Pleasure Chest and San Francisco’s Good Vibrations. She began her association with the Nerdist as a contributing writer before launching the podcast in 2011.

“When I first started, my mission statement was really to reduce shame and normalize sexuality,” Daughetry said. “Because sex positivity isn’t necessarily ‘Yay, everybody go have all the sex right now!’ It’s that you should accept yourself for how you are and how you feel. If that means you don’t want to do it, don’t do it. That’s what sex positivity is. It’s a matter of accepting yourself.”

To commemorate Valentine’s Day, Podspotting grabbed some time with Daugherty to talk about the holiday—its merits, its problems, and her own personal favorite V-Day.

The Daily Dot: Valentine’s Day is an oft-maligned holiday. It’s regularly criticized as a “Hallmark holiday,” an overly commercialized excuse to sell cards, candy, and other assorted tchotchkes. As someone who tackles love, sex and relationships week in and week out, do you see something more to Valentine’s Day?

Absolutely yes! I mean, ask yourself: Why do we have winter holidays? Because it’s the darkest part of the year. We want something to light our winters up with. Valentine’s Day is a wonderful holiday. It’s not just commercial.

The problem is that there’s so much pressure on it and so many expectations. If you thought of Christmas solely as the day that all of your friends and family expect gifts from you, it would be very stressful. I choose to think of it as a time for lots of eating and hugs and cool, weird music. Really, Valentine’s Day is just society’s way of saying “Love is important to us. Let’s celebrate it.” That’s it.

For people in relationships, it’s a nice excuse to renew the romance with a surprise, with something new, with a flirtation, with a giggle, something. And even for single people… I mean, I’m not in a relationship right now. I don’t have a Valentine. And yeah, there’s a bit of a funny feeling about that, but at the same time, it’s a nice time to reflect. What do I want? Do I even want something? What specifically do I want out of love? It’s a nice time to process.

DD: As a sex educator you’ve taught workshops at and worked in sex-positive adult boutiques, like Los Angeles’ Pleasure Chest. What’s Valentine’s Day like in those environments? Is it like the retail Christmas rush?

Oh, people get crazy. When it comes to the retail and the consumer goods aspect of the sex industry, it’s like the second Christmas. I don’t know if it’s more popular than Christmas, but it’s definitely up there. You get a lot of people who are like, “Oh crap, Valentine’s Day is coming! I need to buy some massage oil!” or “We need to spice it up—where are your games?” or “Where are the vibrating panties?” It’s a fun time.

DD: Do you ever feel like the commercial aspects of Valentine’s Day undermine the actual point of the holiday—the romance and the sexuality?

There can definitely be a problem with that. I’ve seen it first-hand. I’ll, for instance, do a class for a group of married women in someone’s home, and I’ll bring toys for sale. And they may all have all sorts of marital problems, yet when I give them any sort of recommendation outside of purchasing something, they’re not having it. They want to know what to buy to fix a marital sex issue. And that’s a problem. The idea that buying something will fix an issue that you have with your relationship or yourself is pretty sad. Toys are just tools. They’re not going to build the house for you.

I think Valentine’s Day is best when it’s a conversation starter, when it gets you and your partner to say “What does love mean to me? What is it supposed to mean? Do we feel loved?” It’s a good time to take your relationship’s pulse. … The best sex, honestly, is not about expanding behavior to the point that you’re getting super-kinky or whatever. The kinkiest sex alive is still lame if you’re not present and going after what really lights you up.

Great sex is about connecting with your partner and going after who you are and what you really want in bed. All of the whips and crops and chains and games and books aren’t going to help you if you can’t be your authentic self.

DD: As the host of a sex-focused podcast who takes a lot of listener questions, and as a sex educator, are there certain questions that you feel like you get every Valentine’s Day?

The interesting thing about the winter holidays, including Valentine’s Day, is that it often brings people out of the woodwork who wouldn’t ask questions otherwise. It does kind of inspire them to go beyond themselves and expand. I like that about it. I do get a lot of “What’s the best thing”-type questions, like the best vibrator or the best oil. Which, honestly, is the most annoying question, because everybody’s different. I can tell you what’s popular, but that doesn’t necessarily mean anything. What’s popular is not necessarily best for you. I’ve seen plenty of popular things that are very dumb. I can get annoyed by the popular.

DD: Do you have a particular favorite Valentine’s Day experience?

My favorite? I was madly in love. Like, the kind of love where you think you’ve been in love before, and then you really fall in love. And it’s almost unhealthy and obsessive, because you like this person so much. So I spent all day creating a scavenger hunt to do at his house when I came over that night, because he was planning to cook me dinner. I created these little scrolls of rolled-up paper that I burned the edges of so that they looked like old pirate manuscripts. While he was cooking I hid them all over, under the bed, in the couch cushions, in the freezer. They had these little trivia questions—about how we’d met, things we talked about early on, and even a math problem that he had to solve, because he was a smart guy, so naturally I figured a math problem would be good. There was a prize of some sort. So we had this amazing candlelit dinner, and both of us were really bringing our A-game, trying to make it a special, but still casual, night. It was magical. And then his roommate came home and offered us both ecstasy. We had not planned for that part at all, but we figured “What the heck? We’re adults.” We decided to take a half-dose. That kicked us into absolute, well, ecstasy. We were giggling and happy and ridiculous doing that scavenger hunt. It was the best time I could possibly imagine having with someone. We were just laughing these fits of joy. And I’m sure we had wonderful intimate time after the hunt was over. It was delightful.