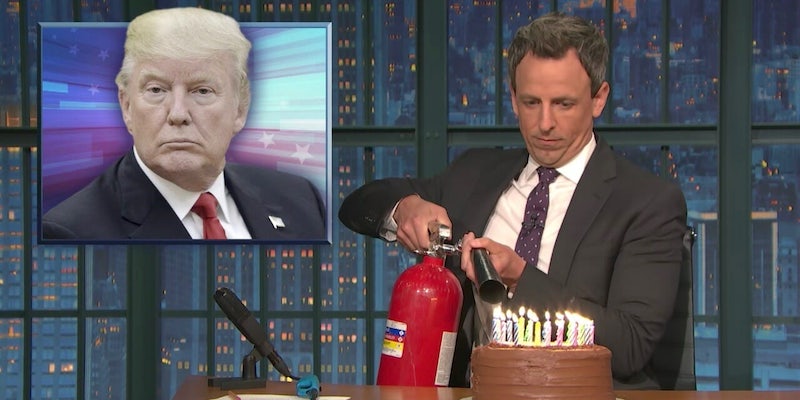 Seth Meyers to Donald Trump: Congratulations, you played yourself

He did it to himself.

Seth Meyers attempted to belatedly celebrate Donald Trump’s birthday with a cake after missing it on Wednesday’s show, but the revelation that Trump was personally under investigation for possible obstruction of justice really put a damper on things.

After he put out the birthday cake, Meyers looked at what’s happened since the Washington Post’s bombshell report that Trump was being investigated after he fired former FBI director James Comey. Ironically, before Trump fired Comey, Comey told Trump that he wasn’t being investigated.

Meyers couldn’t help but invoke the “immortal words” of DJ Khaled to perfectly describe how Trump got to this point: “Congratulations, you played yourself.”

But while Robert Mueller’s investigation into Trump—which Trump just appeared to confirm on Twitter—is underway, Meyers highlights one of the other major stories happening this week: Senate Republicans are quietly working on their plan to repeal and replace Obamacare that’s so secretive that other senators don’t even know what’s in it. And that’s not something Meyers can simply put out with a fire extinguisher.