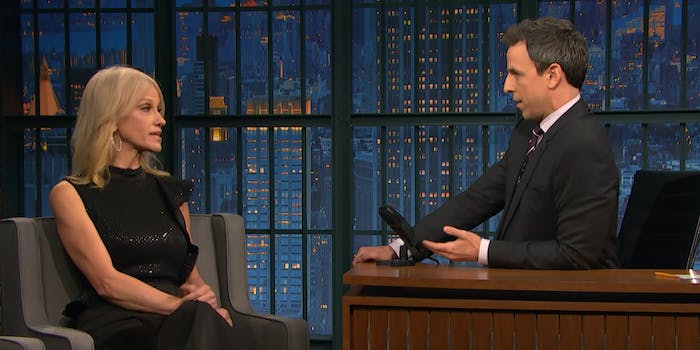 The timing for this interview could not have been better.

CNN’s bombshell report on the existence of unverified and classified documents alleging the Russian government has compromising financial and personal information on Donald Trump broke just as Seth Meyers was getting ready for Tuesday night’s show. And it resulted in a tense and confrontational interview with Trump’s campaign manager Kellyanne Conway, who happened to be his first guest that night.

Meyers kicked off the interview by trying to find common ground with Conway, acknowledging that she and her team ran a successful campaign. But he quickly brought up the report to Conway, who pointed out that it was based on unnamed sources. She also incorrectly added that the report was based on a Russian investigation.

(It appears that the interview was filmed before BuzzFeed released the sensational documents included in the report CNN referred to—or Meyers didn’t know about it at the time.)

Conway also blamed intelligence officials for allowing this to seep out.

“And I have to say, as an American citizen, regardless of your party or if you don’t like politics at all, which are many Americans, we should be concerned that intelligence officials leak to the press and won’t go and tell the president-elect or the president of the United States himself now, Mr. Obama, what the information is. They’d rather go tell the press.”

Meyers corrected Conway that the CNN report was about the fact that Obama and Trump had been briefed on the information, to which she said, “Well, he has said that he is not aware of that.”

“OK, that concerns me,” Meyers replied.

Conway also objected to the idea Meyers put out that Trump doesn’t have any curiosity about whether Russia interfered with the election, regardless of the outcome.

Throughout the 13-minute interview, Meyers pushed back and fact-checked Conway, and he called her out for her attempt to pivot away from discussing Russia, albeit admitting that she’s rather good at it. They eventually discussed other topics like Trump’s tweeting habits and the appearance of hypocrisy in some of Trump’s cabinet picks, given that he ran a campaign calling for ethics reform and “draining the swamp.”

Meyers also asked her why it has taken so long for Trump to finally hold a press conference when other presidents have historically done so much sooner.

Again and again this election, Meyers’ has demonstrated his skills as a political force in late-night TV, and his interview with Conway is no different.

Despite the tone, Meyers tried to end his conversation with Conway on a lighter note with a bet. He doesn’t think we’ll see Trump’s tax returns in the next four years. While Conway doesn’t take his offer, she believes Americans will have a different focus.

“And I bet—and I know because this was talked about during the campaign many times—I bet that most Americans really care what their tax returns will look like after he’s been president for four years,” she said.

“I think that means you’ll agree with me,” Meyers said with a smile.