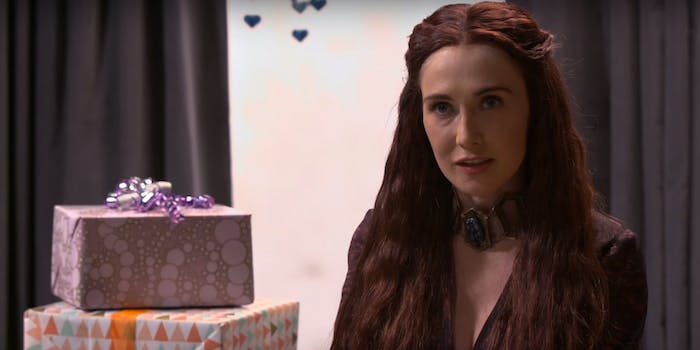 Seth Meyers invited Melisandre to his baby shower, and it didn’t go well

'If it’s a girl, lock it away in a dark tower forever and hope it’s not consumed by grayscale.'

Game of Thrones’s red priestess Melisandre has spent four seasons showcasing the powers she received from the Lord of Light through tricks, blood sacrifices, the occasional shadow assassin, and other potentially unexplored skills. But as an appearance at Seth Meyers’s baby shower demonstrates, Melisandre’s social skills leave something to be desired.

The Late Night host, who is expecting his first child with wife Alexi Ashe, invited Melisandre to the shower because they’d gone to college together, but the experience went about as well as you’d expect.

The other guests didn’t take too kindly to Melisandre’s idea of “normal” or her favorite story about how the shadow assassin clawed its way out of her to kill the false King Renly Baratheon. Nor could she tell anyone what happened to her crush Jon Snow. Perhaps Meyers, who had him over for dinner once, can fill everyone in?

“The night is dark and full of terrors?” Not exactly the best way to describe impending parenthood—but probably an accurate one.