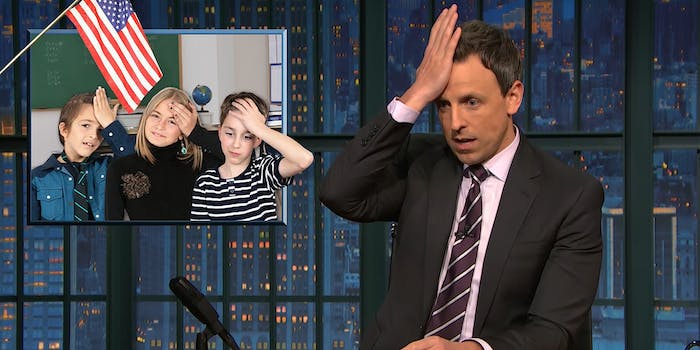 Whether it’s conducting foreign policy, peddling a false conspiracy theory, or proving a comedy sketch’s point, Donald Trump‘s often erratic Twitter habits have been cause for alarm. And Seth Meyers, who returned to TV after a week off, highlighted the conspiracies and eyebrow-raising foreign policy decisions touted by Trump in his latest “A Closer Look” segment on Late Night.

While Meyers doesn’t mention the gunman who shot at a Washington, D.C., pizzeria while trying to investigate a false conspiracy theory spread by fake news sites (and at least one of Trump’s advisors) over the weekend, he has plenty of other evidence to show that Trump’s recent decisions are, well, troubling. As Meyers put it, his ability to falsely claim something without any evidence and his brash foreign policy approach “do not mix well.”

With no evidence, Trump claimed that millions of people voted illegally, which some of his supporters fully believe, and then retweeted a 16-year-old to prove a reporter wrong. He broke with decades of presidential protocol of not acknowledging Taiwan by accepting a congratulatory call from Taiwan’s president. Other conversations with the prime minister of Pakistan and the president of the Philippines bring additional reason for worry.

“Now, if any of this makes it seem like Trump’s in over his head, that might be because he is,” Meyers said. That’s probably an understatement.