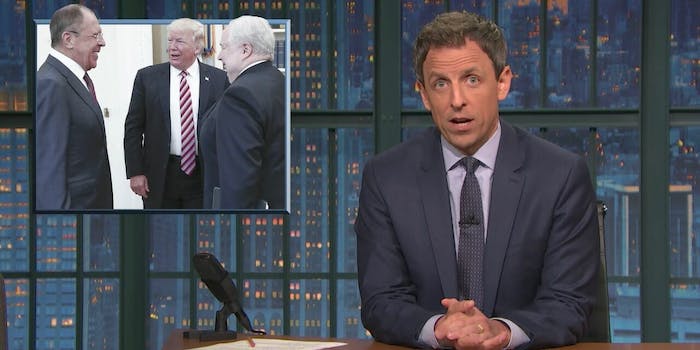 ‘We’re at a point now in the Trump presidency that feels very much like a pivotal moment for our democracy.’

Meyers’ latest “A Closer Look” dives into Trump’s admission of why he fired FBI Director James Comey and his threat to reveal secret tapes while covering the troubling actions of an “increasingly authoritarian President.” But he also broke down the allegations in the Post article for those who might not have heard it. (Since the episode aired, Trump confirmed that he shared intelligence with the Russians.)

“Now I know why the Russians are smiling in that picture,” Meyers joked. “Look at them! They must have been like, ‘Can you believe how easy this is? I can’t believe it! We did not even ask for it, just gives.’”

He called on Republican members of Congress to “exercise the checks on presidential power that our Constitution prescribes,” noting they had a responsibility to do so.

Coincidentally, Meyers had Sen. Ben Sasse (R-Neb.) on Late Night as one of his guests. So like his interview with Kellyanne Conway from January in the wake of the Russian dossier on Trump, Meyers got a real-time reaction on the Washington Post story. Sasse took caution in looking at the different angles of the story.

“When you have the day job I have, it’s like every 12 minutes, if you’re away from Twitter, it can always be like this kind of a moment because you don’t really know what’s just happened,” Sasse said.