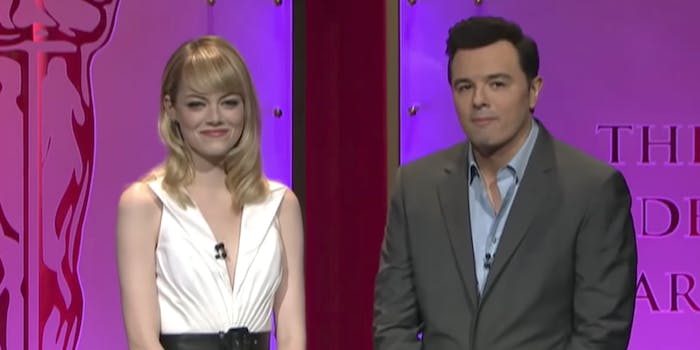 This shows just how open this decades-long secret actually was.

As it turns out, many more Hollywood types knew about the allegations made against disgraced producer Harvey Weinstein than previously believed. Just take Seth MacFarlane, Emma Stone, and the entire audience for the 2013 Oscar nominations.

That year, MacFarlane hosted the Oscars, and even co-presented the nominations announcement with Stone. However, one joke from the Family Guy creator’s hosting library has stuck four years later, in particular because it appeared to call out Weinstein’s predatory behavior amid allegations of offering work in exchange for sex.

In a clip displaying the joke, MacFarlane announced the nominees for supporting actress, including Anne Hathaway and Sally Field, before cracking to them, “Congratulations, you five ladies no longer have to pretend to be attracted to Harvey Weinstein.”

The crowd chuckled along. Meanwhile, Stone’s silence intensified the gravity of MacFarlane’s insinuations—that these accomplished actors may finally get their big break from kissing up, perhaps literally, to the producer.

Despite the media’s current stronghold on coverage of sexual harassment and assault allegations against Weinstein, according to news coverage at the time, the line didn’t receive as much as a batted eyelash. The Atlantic wrote that MacFarlane’s jab, in part with another joke about Hitler, “elicited some laughs, some wariness, and a lot of genuine discomfort from all around the world of Hollywood.”

“There were laughs, and audible groans” in response to the Weinstein joke, the publication noted. It also insinuated that the joke was about “actresses having sex with Harvey Weinstein,” with no mention of sexual harassment or assault rumors.

The Hollywood Reporter called the joke “memorable,” while Deadline just noted that the joke was one of a series that “ripped Academy Awards personalities.”

In an exclusive interview with Weinstein that focused heavily on the year’s Oscar nominations, published less than three weeks later, a Deadline reporter didn’t ask him about MacFarlane’s riff. However, this is what Weinstein had to say when asked if he rejected the theory that there’s a connection between violence and violence depicted in entertainment:

WEINSTEIN: I’m not as educated as I should be here; I want to know more. But I certainly reject that premise.

DEADLINE: Could Hollywood do a better job of reigning in the depiction of violence and have stronger moral ground to stand on? Am I giving you indigestion right now?

WEINSTEIN: No not at all, I’m just trying to think it through. Mike [Fleming Jr.], I don’t have the answers to these questions. I really don’t. They’re so complicated, you need people with better facts and intelligence. In this situation I have to be a follower, not a leader.

See the clip of MacFarlane’s joke below:

Update 2:55p.m., Oct. 11: Wednesday afternoon, MacFarlane tweeted a statement regarding the joke about Weinstein, stating that the jab was inspired by his friend Jessica Barth’s account of Weinstein’s attempted advances. Barth shared her account for a New Yorker piece published on Tuesday.