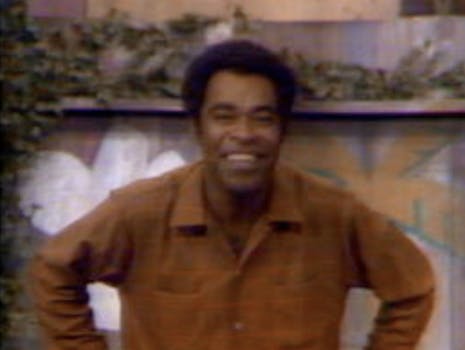 The character Gordon Robinson spoke the very first line on Sesame Street in 1969, but the show has never been able to identify the actor from the pilot episode.

Sesame Street has turned to Reddit to help unravel a mystery as old the show itself.

In 1969, the summer before the show debuted, Sesame Street filmed a pilot episode. When the show put together an anthology two years ago, they realized they had no idea who played the character Gordon in the pilot. (He was replaced by actor Matt Robinson when the show aired.)

“We’ve asked everyone we could think of,” Dan Lewis, Sesame Street’s director of new media communications, wrote. But no one could remember or recognize the man who played Gordon in that first test pilot.

So Lewis turned to the social news site and its nearly 30 million monthly visitors.

“Any clue would be great, even if it’s seemingly esoteric or mundane,” Lewis wrote on Reddit.

That post shot to the top of the site’s r/AskReddit section, which boasts nearly 1 million subscribers. Within 24 hours, it had attracted more than 1,600 comments. Many Redditors began pouring over old books on Sesame Street; others dissected the lost actor’s mannerisms.

“These mannerisms seem more like the mannerisms of a stage actor than a film actor,” redditor edgarallenbro wrote. After thoroughly analyzing the brief appearance on Sesame Street, the redditor figured the man was most likely a Broadway actor. He suggested the man may be actor Robert Guillaume (perhaps most famous for his role in the 1980s show Soap).

Guillaume claimed he “had done a few things” with PBS around 1969, edgarallenbro observed. The redditor then posted photos of Guillaume side-by-side with the mystery Sesame Street actor and launched into a convincing 300-word analysis of the two men’s appearances.
.
Redditors also launched the #FindGordon hashtag on Twitter, which has since been used more than 300 times, according to social media search engine Topsy.

But so far, all of Reddit’s significant crowd-sourced brain power hasn’t paid off.

“Right now, we have a lot of potential leads but nothing solid — basically, it’s mostly ‘this looks like _____’ speculation,” Lewis wrote last night on Reddit.

“We’re still hoping to #FindGordon — no luck so far,” he added on Twitter this morning.

If you think you can help, check out the official Sesame Street page. They’re posting a series of clues that might just help you identify Sesame Street’s long-lost actor.