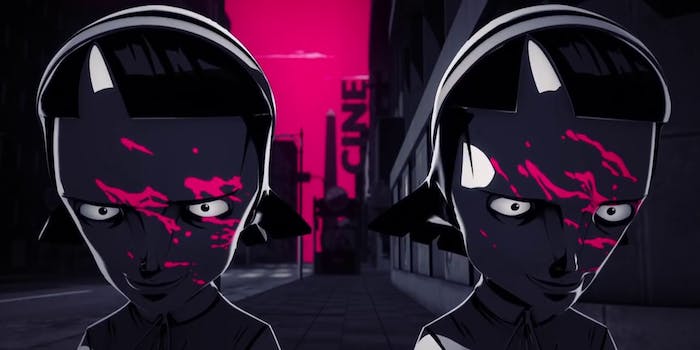 Series, anthologies, and miniseries that will keep you up at night.

Part murder mystery and part supernatural horror, this Stephen King adaptation tells the story of Patrick Bateman, a little league coach who brutally murdered a young boy––but was somehow seen both at the scene and at a conference hundreds of miles away. Throw in a jaded cop with a past, and an eccentric investigator with a sixth sense. and you’ve got one hell of a ride. Best of all, the destination remains a mystery right up to the very end).––Colette Bennett

Los Espookys is about four friends with a passion for horror and their clever plan to sell thrills and chills to an audience with a hunger for fear. Absurd and deadpan in equal measure, Los Espookys is also notable for being the first Spanish-language show to be marketed directly to an American audience.––C.B.

This 2008 cult classic adapted from a novel series poses a future where vampires can live among humans thanks to the invention of synthetic blood. Of course, that doesn’t mean their kind is universally accepted. With terrific performances and lots of spicy sex, True Blood will scratch your itch for everything from high drama to bloodletting.––C.B.

HBO Asia’s curation for American audiences is exceptionally well done, and Grace follows that trend with a multi-layered tale about a family gathering for a wedding in a hotel with a ghostly resident. (Like every good ghost, she has a vengeance problem). The series is only four episodes too, so it’s an easy and satisfying weekend binge.––C.B.

“Chernobyl is a meticulous retelling of what occurred behind one of the worst man-made disasters in modern history, leaving no stone or piece of radioactive graphite unturned. With a stellar cast and a script that cranks up the tension, Chernobyl relays an astounding and, at times, incredibly relevant tale … Watching Chernobyl can sometimes feel like you’re sitting through a horror film.” —Michelle Jaworski

Latin American urban legends are the inspiration for Fantasmagoria, a word that refers to a dream state where real and imaginary elements are blurred. These bite-sized episodes tour the viewer through Mexico, Brazil, Argentina, Venezuela, and Chile. It’s fascinating to see horror through the lens of another culture, although perhaps the vein of fear pulses the same no matter where it hails from.––C.B.

This horror series is comprised of six episodes, each hailing from a different Asian country (Indonesia, Japan, Korea, Malaysia, Singapore and Thailand). Each delves into stories rooted in the folklore of each, which contain everything from the supernatural to the occult. If you were a fan of the J-horror boom back in the ’90s, you’ll probably eat up every minute of Folklore.––C.B.

A woman named Sarah stands at the center of Halfworlds, unaware that she could soon be the catalyst between two clans: the Demit, bloodthirsty creatures that hail from Indonesia mythology, and humanity. The series is urban fantasy on an epic scale and a refreshing watch for those who have had enough of zombies and vampires.––C.B.