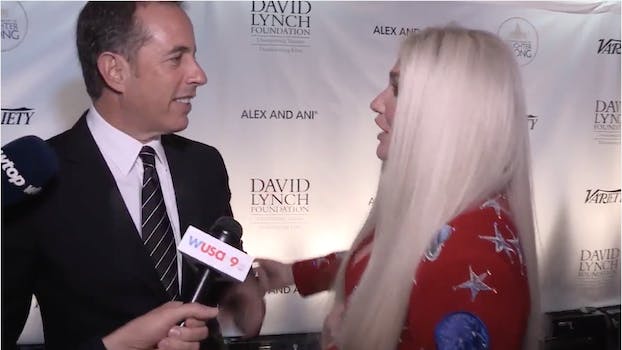 Jerry Seinfeld turns down hug from Kesha a whopping 3 times

It turns out Jerry Seinfeld isn’t much of a hugger.

The comedian was giving an interview at the first National Night of Laughter and Song on Monday when he denied Kesha a hug not once, but three times. Things were downright weird:

Seinfeld was in the middle of talking about how he finds it difficult to sleep when he’s tired, when Kesha ran up to him and said, “Oh my gosh I love you so much. Can I have a hug?”

“No thanks,” Seinfeld responded.

It looks like Kesha must have thought he was just being shy because she continued to ask for a hug three more times, before giving up.

Luckily enough for Kesha, it doesn’t seem like it was anything personal. After she walked away, Seinfeld looked at the cameras and said, “I don’t know who that was.”

When he was told that he’d just snubbed Kesha, he didn’t seem phased.

No one on Twitter seems to agree on who should feel worse about the situation—Kesha, for allegedly intruding into Seinfeld’s personal space, or Seinfeld, for rejecting a hug from Kesha.

not everyone wants to have their interview interrupted by someone who wants a hug, especially if you don't know them

Poor Kesha, I mean he could have just done a little side hug or something.

@KeshaRose you owe @JerrySeinfeld an apology for violating his personal space.

I am sure that when Seinfeld heard Kesha singing 🔥 he regretted that ..

Everyone could agree, however, that it looked awkward AF.