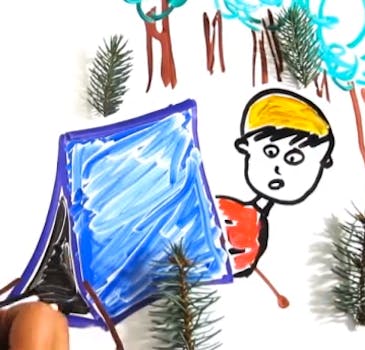 A scientific explanation of “Morning Wood”

Alright, everybody. Settle down. Mitchell Moffit and Greg Brown are going to teach you about a not-so-little thing called “Morning Wood” and just how in the hell we men get it.

Morning Wood is the casual term associated with morning time erections—the ones you wake up with—and they’re both funny and peculiar. A lot of people think they come about because of the, um, things that we were thinking about in slumber, but it turns out that only half the story.

As the guys from asapSCIENCE explain in “The Science of ‘Morning Wood’,” the latest in the duo’s whiteboard tutorial series, nocturnal penile tumescence occurs a number of times throughout the night as men go in and out of REM sleep cycles. As that occurs, your brain shuts off a series of neurotransmitters, one of which is norepinephrine, which happens to be involved with the controlling of erections.

As Moffit explains, the norepinephrine is “like a stop sign to blood flow.” It holds up the entire construction of boner city.

Norepinephrine decreases as you go in and out of REM sleep, which is actually a good thing. The influx of blood leads to oxygenation of the penis and helps repair and maintain functionality.

The reason we tend to wake up with it is because humans generally wake up in the middle of a REM cycle.

In other words, it’s not because we’re dreaming about Kate Upton five minutes before the alarm clock goes off.

There’s also that whole thing about morning wood sometimes coming as a response to a full bladder, something Moffit and Brown attest is evidently true.

Consider it good news: that reflex erection is what sometimes keeps you from peeing yourself in bed those nights.