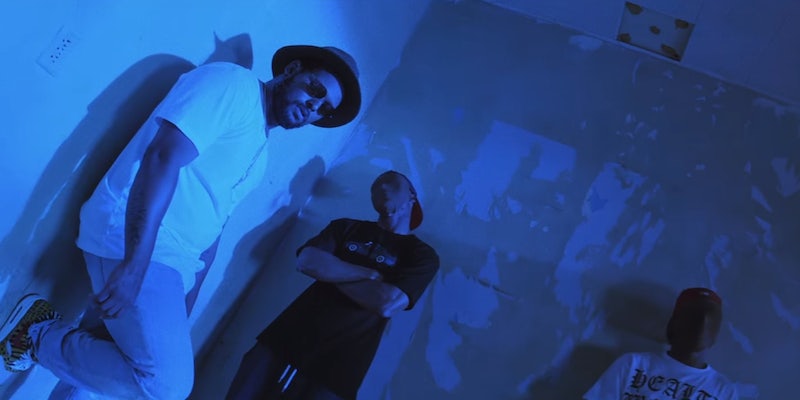 Schoolboy Q and the confines of outlaw music

It's a dank piece of art—but a troublesome hole to jump into.

The emerging consensus is that Schoolboy Q’s Blank Face LP is a messy but exceptional record—a sizable notch in gangsta rap’s three-decade-plus timeline. It’s also big-selling outlaw music in a summer of insanity. My feelings about it change daily.

Q is deeply connected to unifying messiah Kendrick Lamar, but there’s no way Blank Face was going to be a sprawling but politically digestible epic like To Pimp A Butterfly. Q’s oeuvre hasn’t pointed that way, and the video for “Groovy Tony,” released in April, confirmed that the L.A. rapper with the punchy flow was going to stay grimy. Instead of an MC perched on a street lamp over a highway, we get a dude with no facial features, in a junkyard, shooting an assault rifle.

So Blank Face, despite the breadth of its collaborator list (yup, Kanye is there; so is Miguel) and the entertainment value of its production (all hail modern boom-bap), isn’t aiming for a big conversation. It’s not intended to reframe any debates. It’s a dank piece of art—a troublesome hole to jump into. At a time when any given Sunday can bring a fresh piece of brutal news, that hole is unforgiving.

That’s also the chief thrill of outlaw music, of course: Go inside, find the mirror, figure out just how much the scene fits you or repulses you. “My heart a igloo,” Q says during “Groovy Tony,” and I laugh not only because the metaphor is funny, but also because that kind of cold bravado is beyond my reach. On “Ride Out” he talks about “shootin’ out my momma’s whip”—there’s an accessible universe of spoiled morals in there, even if the line just connects with a memory of using the family car for some boilerplate suburban mischief.

Gunplay, though. It’s easy to be reminded about guns these days, about murderous corners the world over, about human minds pushed to one extreme or another. Constant updates about perpetrators and victims can wear down anybody. And during that din, an album like Blank Face can feel excessive, like something to consume deliberately, as if the “CNN of the streets” should be preempted temporarily by regular-old CNN.

But just for a minute, maybe? That’s the thing about pro-level gangsta rap: As with all hardy outlaw music, there’s life in its swirl of bloodlust and guilt, in the way it can inspire backhanded twinges of empathy, in its dynamic of fight hard/party well. Blank Face, with its decidedly Cali currents and its sneakily psychedelic edges, leans toward the sunshine occasionally, pulling itself out of the muck. Sometimes those reprieves override my urge to see what quasi-apocalyptic real-life craziness I’ve missed. Sometimes they don’t.