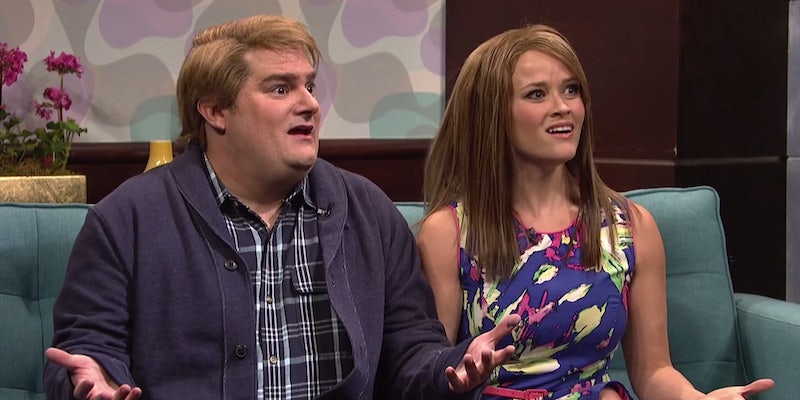 Did ‘Saturday Night Live’ copy this Muhammad skit from a Canadian sketch show?

Saturday Night Live is being accused of plagiarism after a skit from its latest episode showed many similarities to another skit from a Canadian sketch-comedy show.

The segment from the May 9 episode of SNL, called “Picture Perfect,” featured celebrity host Reese Witherspoon and Bobby Moynihan as a couple competing for $1 million on a game show with celebrity guest Reginald VelJohnson (Kenan Thompson). The contestants are asked to draw the Prophet Muhammad, an act forbidden in Islam.

Laughs ensue as panic sets in and two of the contestants try to get out of drawing Muhammad and game show host Taran Killam urges them on. The sketch aired just days after a SWAT team killed a gunmen who opened fire outside of a Muhammad cartoon contest in Texas.

Shortly after it aired, the sketch drew criticism from people who noticed striking similarities between it and a sketch on the CBC show This Hour Has 22 Minutes. That sketch, posted to YouTube in January, also takes the form of a Pictionary-esque game show, with a contestant who refuses to draw Muhammad after being told to do so to win $1 million.

There are some differences between the two sketches: SNL’s version has another set of contestants that are competing, a celebrity guest to help them, and about three more minutes of runtime than the one that aired on the CBC. But there are the basic concept, the execution, and the ultimate punchline are virtually identical.

It’s not the first time SNL has been accused of stealing material this season. In October, the Groundlings, which has produced many SNL alums in the past, accused the show of stealing its Tina Turner sketch from last September.

DHX Media, which produces This Hour Has 22 Minutes, is accusing SNL of copyright infringement.

“While imitation may be the sincerest form of flattery, DHX Media Ltd. takes infringement of its intellectual property very seriously,” DHX Media executive chairman Michael Donovan told the Hollywood Reporter in a statement.

This Hour Has 22 Minutes writer Bobby Kerr and Mark Critch, who starred in the sketch, are also noting the similarities.

Really liked the @NBCSNL Muhammed sketch when @jwPencilAndPad wrote the exact same one for @22_Minutes. http://t.co/eoLILk2gIT

This has happened a few times both ways but this is the closet I've ever seen http://t.co/x3MswM7OMQ

NBC had had no comment about the plagiarism charge.