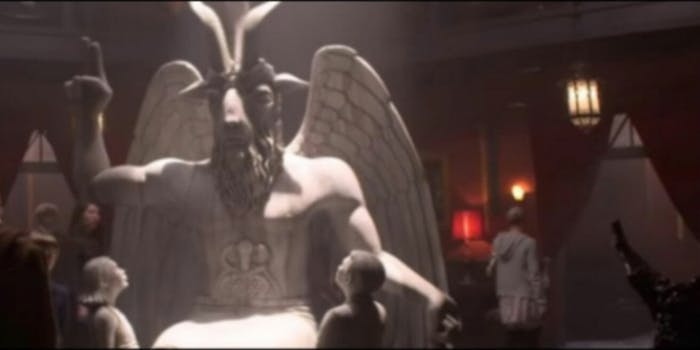 The Satanists did not back down against 'Sabrina.'

Netflix has settled a $50 million lawsuit with the Satanic Temple over the use of a Baphomet statue in The Chilling Adventures of Sabrina that the temple says closely resembles its copyrighted design.

Lucien Greaves, the co-founder of the Satanic Temple, tweeted last month that the Temple was “taking legal action regarding #TheChillingAdventuresofSabrina appropriating our copyrighted monument design to promote their asinine Satanic Panic fiction,” two days after the show was released on Netflix.

Yes, we are taking legal action regarding #TheChillingAdventuresofSabrina appropriating our copyrighted monument design to promote their asinine Satanic Panic fiction.

In another tweet, Greaves noted that another religious institution would likely have a similar reaction if its religious monuments were imitated. “Would they be as understanding of a fictional show that used a real mosque as the HQ of a terrorist cell?” he asked.

I'm amazed that anybody is confused as to why we would seek legal remedy over Sabrina using our monument. Would they be as understanding of a fictional show that used a real mosque as the HQ of a terrorist cell? A fictional Blood Libel tale implicating real world Jews?

Neither Netflix nor the Satanic Temple revealed the terms of the confidential settlement, but the two “amicably settled” the lawsuit, according to a Patheos article written by Greaves. “The unique elements of the Satanic Temple’s Baphomet statue have been acknowledged in the credits of episodes which have already been filmed,” he wrote.

For purposes of comparison… pic.twitter.com/AZJvmq1Cks

The Temple’s Baphomet statue, which Greaves tweeted a photo of alongside the version seen in the Netflix show, features a seated Baphomet with two of the fingers on his left hand raised. In front of him, two children stand and gaze upward, toward his face. The statues share a striking resemblance.

Lisa Soper, the production designer for the show spoke with Vice, saying the show’s statue was not modeled after the Satanic Temple’s Baphomet. “I think that’s kind of a coincidence,” she said.

In an interview with the Daily Mail, Greaves said the Temple pursued the copyright claim in part because of the way the show portrays the image of Baphomet—or “the Sabbatic Goat”—as evil. “I feel that the use of our particular image that is recognized as our own central icon displayed fictionally as central to some cannibalistic cult has real world damaging effects for us,” he said.

In an emailed statement to Vice, Greaves noted seeing “signs of a Satanic Panic revival today, and as Satanists we need to do all we can to fight back against negligent and harmful representations.”