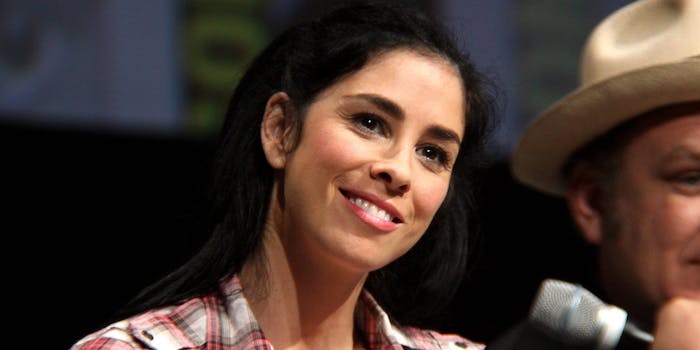 Sarah Silverman reveals she was in the ICU last week

Sarah Silverman said that she’s “insanely lucky to be alive” in a lengthy Facebook post after she spent most of last week in the ICU.

She published the update Wednesday, noting it was an explanation of why she hasn’t been around on social media lately. What she initially thought was a sore throat turned out to be a case of epiglottitis, a life-threatening condition where your windpipes are blocked after the cartilage covering it swells up, which then blocks air going into your lungs. She spent five days in the ICU, where she was given a breathing tube and put partially to sleep. She woke up five days later and didn’t remember anything that happened.

“I owe my life to Dr. Shawn Nasseri, Dr. Robert Naruse, Dr. Rob Huizenga, every nurse, and every technician & orderly at Cedars who’s punch-the-clock jobs happen to save human lives on the regular,” Silverman wrote.

Silverman’s post is candid and harrowing, but even during her ordeal, her wit and humor was on. She thanks her boyfriend, actor Michael Sheen, and the friends and family who were constantly by her side, as she asked her loved ones if they’d seen Hello My Name is Doris with a board she used to communicate when the breathing tube first came out.

“I couldn’t speak for a while and I don’t remember a lot of my ‘lucid’ time, but Amy (the Zvi) told me I stopped a nurse—like it was an emergency—furiously wrote down a note and gave it to her,” she wrote. “When she looked at it, it just said, ‘Do you live with your mother?’ next to a drawing of a penis.”