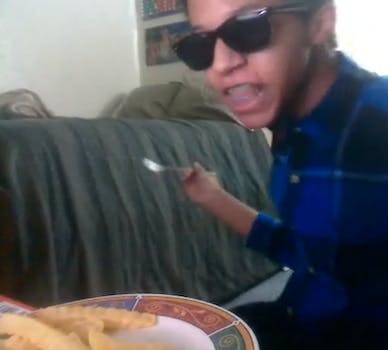 Sandy, a Las Vegas teen with serious dance moves, returns with another appetizing routine to the tune of Janet Jackson's "What Have You Done For Me Lately?"

We should all be grateful that this kid’s mother never told him that he shouldn’t play with his food.

Sandy, a Las Vegas teen with an elevated bed and a style that’s second to none, is the man behind “How I Eat My Favorite Fries,” the most animated performance you could possibly expect from a kid and his crinkle cuts.

Played out to the tune of Janet Jackson’s sassy 1986 thriller “What Have You Done For Me Lately?,” “French Fries” sees Sandy—an obvious style disciple of Jackson’s brother Michael (check the socks!)—take a roundabout approach to playing with his food, stepping into his room and shimmying across the floor until he’s close enough to grab a fork.

“French Fries” is actually not the first time that Sandy’s posted clips of himself eating food. In April, he showed his Tumblr followers exactly how he eats soup, and his “How I Eat My Favorite Topping of Pizza” video went gangbusters to the tune of 607,000 views.

Any awkward-looking teenager who’s willing to dress up and seduce a cold slice of cheese pizza while Prince’s “Sexy Motherfucker” plays over the loudspeaker deserves an excess of 600,000 YouTube views. That’s just a fact.

Sandy has spent the hours since posting “French Fries” answering fan mail on his Tumblr page, which he updates with goofy, cryptic pictures and teenaged, angsty reactions quite regularly. He’s been quick to thank his fans for “all the support and love,” offering his fans a photo of him wiping a tear from his eye as gratitude.