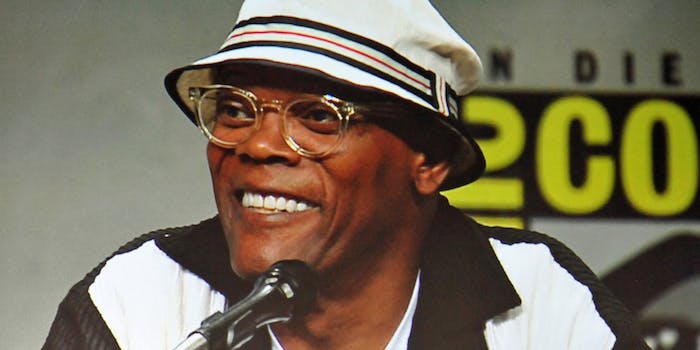 He wants this hard-hitting song to spread.

Forget the ice bucket challenge; Hollywood megastar Samuel L. Jackson challenged celebrities to speak out against police violence by singing what he calls “We Ain’t Gonna Stop Until People Are Free” in a viral video posted on his Facebook page.

Two cases in which police killed unarmed black men—Eric Garner in New York City, and Michael Brown in Ferguson, Mo.—have put police misconduct and racial injustice under a national spotlight. In both cases, officers who killed the two men were not indicted, and therefore will not be charged for their actions.

These cases, along with others, including the fatal shooting of 12-year-old Tamir Rice, have led to massive protests across the country, calling for law enforcement reform and justice for people unfairly targeted and racially profiled by police. Young black males are 21 times more likely to get shot and killed by police than young white men, according to ProPublica.

The rallying cries for justice have become “I can’t breathe,” Garner’s last words, and “Hands up, don’t shoot,” in honor of Brown.

The Avengers and Pulp Fiction star Jackson sang his protest on Saturday, and invited other celebrities to do the same. The lyrics to the 40-second song are as follows.

“All you celebrities out there who poured ice water on your head, here’s a chance to do something else,” Jackson said in the video.

Jackson isn’t the only one speaking out against law enforcement actions in recent weeks. A number of athletes including NBA stars LeBron James and Derrick Rose wore shirts with the phrase “I can’t breathe” during recent game warm-ups, and NFL running back Reggie Bush wore one before a Lions game last week. Players from the NFL’s St. Louis Rams entered the field earlier this month making the “Hands up, don’t shoot,” gesture, honoring Brown and criticizing the hometown police actions.

Jon Stewart crucified the grand jury’s decision not to indict the police officer who killed Garner on The Daily Show. He somberly said: “I don’t know. I honestly don’t know what to say. If comedy is tragedy plus time, I need more fucking time. But I would really settle for less fucking tragedy, to be honest with you.”

Many other celebrities reacted strongly to the decision not to indict in the Garner case.

SMDH….God the world is crying for your help. This really makes me sad. All I can do is pray & I plan on doing … https://t.co/hWGE9vJal4

I'm ashamed. Mostly because I'm no longer shocked at things now-a-days. Nothing is shocking. #EricGarner

We watched him Die. Choked to Death. The world is watching we seek JUSTICE. He couldn't breathe.Were breathing Fire. pic.twitter.com/DolTpkYAtM

How is this America? #ICantBreathe

Jackson isn’t the first celebrity to put a twist on the ice bucket challenge, either. In August, Sleepy Hollow actor Orlando Jones dumped a bucket of bullets on his head to protest “militarized police forces threatening people’s right to assemble” in the wake of Ferguson protests.

So far, no celebrities have answered Jackson’s musical call to action, but the celebrity has added his voice to a growing number of people calling for justice.