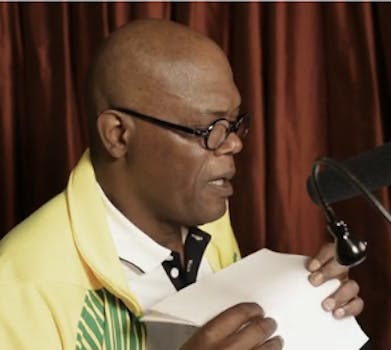 The audiobook publisher's takedown of a Samuel L. Jackson video gets booed by YouTubers.

Gather ‘round, kids. Samuel L. Jackson wants to tell you a bedtime story—if Amazon.com will let him.

In “Go the Fuck to Sleep,” the notoriously profane actor’s reading of Adam Mansbach’s alternative children’s book of the same name gets Auto-Tuned to profound effect. The result resembles an unintentional mashup of the Postal Service and Pulp Fiction. It’s oddly similar to rapper Biz Markie’s classic storytelling.

John Boswell, a 25-year-old composer, created the Jackson remix. Boswell is better known as the maestro for Symphony of Science, the popular YouTube series that similarly turns Cosmos clips and other scientific findings into wondrous pop marvels. The song is part of his comedic spinoff series, Remixes for the Soul, which has include works like Ali G’s “A Science Rap” and George Carlin’s “Save the Trees.”

“Choosing the right melody is the key to highlighting the message,” Boswell told the Daily Dot last year in regards to his scientific method of songcraft. “ If it doesn’t groove with the flow of the original speech it won’t work; if it does, there’s a synergy that gives the series it’s inspirational qualities.”

While Boswell meant that in regards to Symphony of Science, it certainly applies to his Samuel L. Jackson remix—and YouTube agreed. Posted on Feb. 22, the video clocked nearly 100,000 views.

“That first ‘go the fuck to sleep, came out smooth as butter,” wrote JermarcoB91 in a top comment.

“This is the best lullaby, hands down,” added YouTuber SimplyAComment.

Unfortunately, the YouTube video was abruptly pulled on Monday afternoon, due to a copyright claim by Audible, Inc., an Amazon.com subsidiary, which published the audio book.

While Boswell couldn’t be reached for comment on the takedown, he has maintained that his creative works don’t violate copyright, thanks to exemptions in copyright law that allow for “transformative” uses of copyrighted material.

“I consider the works fair use of the original materials,” Boswell told the Daily Dot last year, “and seeking permission for every clip would be cumbersome.”

Indeed, most mashup artists, from Girl Talk to the Gregory Brothers, do not typically seek approval to use their source material, a move that makes them susceptible to—occasionally unjust—copyright claims under the Digital Millennium Copyright Act (DMCA).

While Boswell credited and included a direct link to the source material, that clearly wasn’t enough for Audible, Inc. But fans flocked to his YouTube channel, MelodySheep, which boasts more than 80,000 subscribers, to voice their support.

“Go The Fuck to Sleep was your remix, your artwork, your production,” wrote scyntho121. “The shouldn’t have removed it. Nevertheless, it was a very, very good song.”

“Another supporter voting against banning your GTFTS video,” furthered Toffmonster. “This was a real masterpiece. Thanks for making it. I bet Samuel L. Jackson himself would’ve loved this version. Maybe you could send it to him and ask for posting permission?”

While the YouTube video can no longer be viewed, the track can still be streamed and downloaded on Bandcamp.

That is until Amazon turns out the fucking lights on that source, too.