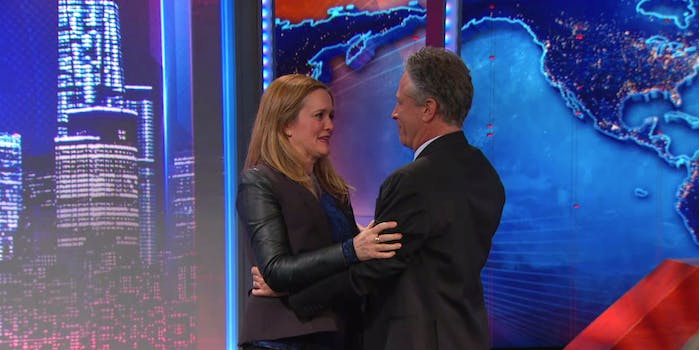 Now, only one soon-to-depart staff member remains: Jon himself.

The Daily Show said farewell to its longest-running correspondent in a fitting and heartfelt tribute on Thursday night.

Jon Stewart weaved some humor into his speech as he praised Samantha Bee for all of the work she had done since joining the show in 2003, but he largely let her—and some of her biggest clips throughout the years—bring the laughs and the discomfort.

Bee’s not the only one to leave recently, with her husband Jason Jones departing last month. We’re not sure how the show will fill the Samantha Bee-sized hole she’s leaving behind.

As she noted to a radio host she interviewed, if she can make a bigot realize that he’s a bigot, she’s done her job.

When Bee came onstage after the montage, all she could do was hold back tears as she and Stewart hugged it out. Sometimes, there are no words.