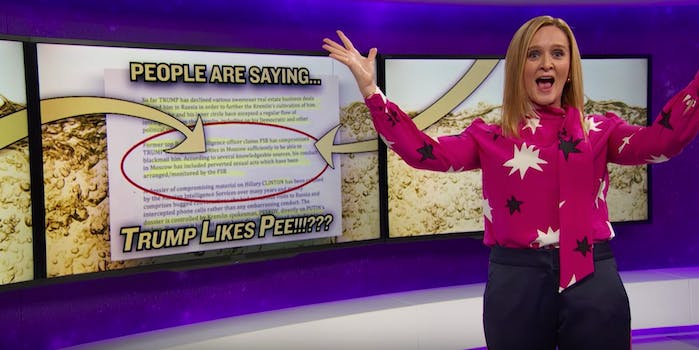 It’s currently unclear whether any of the allegations about President-elect Donald Trump’s links to Russia written in an unverified dossier published by BuzzFeed Tuesday night are substantiated. But for now at least, Samantha Bee is enjoying every minute of it.

Bee called the release of the information—particular one of the more wild allegations—”Comedy Christmas,” and while the claims aren’t yet verifiable, she verifies that the report gives her joy.

She also highlights the other troubling claims in the dossier and takes issue with Trump’s attack on reporter Jim Acosta of CNN, which first published on the existence of the dossier.

“We can only hope that the incontinent sex-worker frosting draws attention to the report’s less delicious details about Russia manipulating our president,” she said. “After all, as the old Disney song goes, a spoonful of hooker urine helps the treason claims go down.”