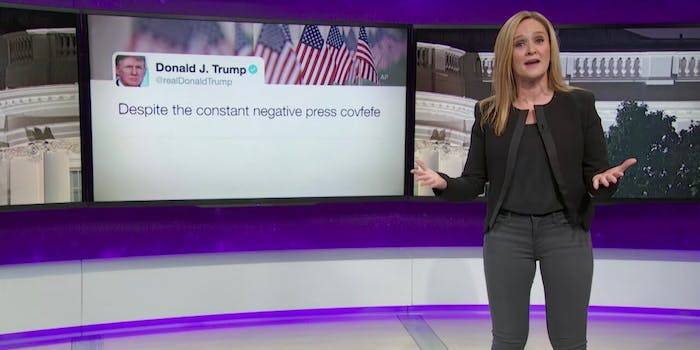 'Trump is right. He really does have the best words!'

Samantha Bee opened up Wednesday’s episode of Full Frontal with some good news: Donald Trump finally made good on a campaign promise, albeit in a way nobody ever expected.

It had nothing to do with reports that the U.S. planned to leave the Paris Accord. No, for a few hours, he Made America Great Again with the birth of covfefe, a completely (until now) made up word which took off online almost instantly, making Bee proclaim that Trump “really does have the best words.”

“The Twitterverse greeted covfefe’s arrival with unfettered rapture,” Bee explained. “For that glorious interlude between midnight and 5am, we were like passengers on the Titanic who decided to say, ‘Fuck it, rock out to the band! Thank you, we are covfefe! We’ll all be dead real soon.’”

“This is what happens when you’ve abstained from your phone for nine days,” Bee continued. “You ejaculate, just like that.”