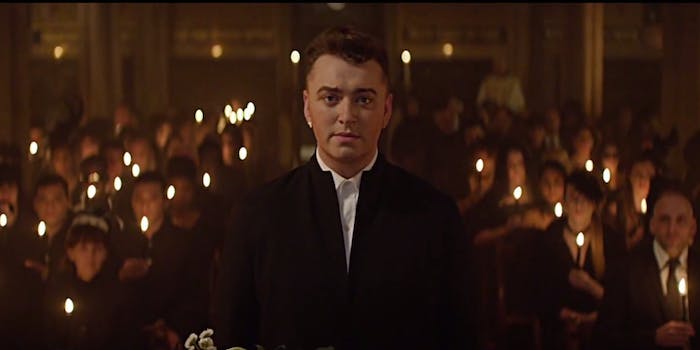 "This video shows my dreams..."

It still remains to be seen if Sam Smith will walk away the big winner at this Sunday’s Grammys, but according to Spotify’s predictions, things look promising. Until then, the six-time Grammy nominee is keeping himself busy by unveiling the music video for his next single, “Lay Me Down.”

The video for one of Smith’s more tender ballads tracks the love and loss of the openly gay Brit, opening on a solemn funeral service before transitioning to a jubilant gay wedding. Directed by Ryan Hope and shot at a church outside London, the moving video is intended to send a message to not only the United Kingdom but to the larger global community about the beauty of LGBT love.

The singer spoke with Rolling Stone from the set about the music video for his latest single.

Obviously gay marriage isn’t legal in churches, and we’re doing a gay marriage today, in the church. We’re the first ever to do it. It’s obviously not a real marriage, but still. The priest just said to us, ‘We’re going against the rules by doing this today,’ which I thought was a lovely element in the video.

Smith took to Instagram and Facebook on Thursday morning to release a note to fans about the video. In it, the singer expressed his hopes that one day members of the LGBT community will be able to get married “under any roof, in any city, in any town, in any village, in any country.”

Despite what happens at Sunday night’s Grammys, it looks as if Smith has already won something much greater.