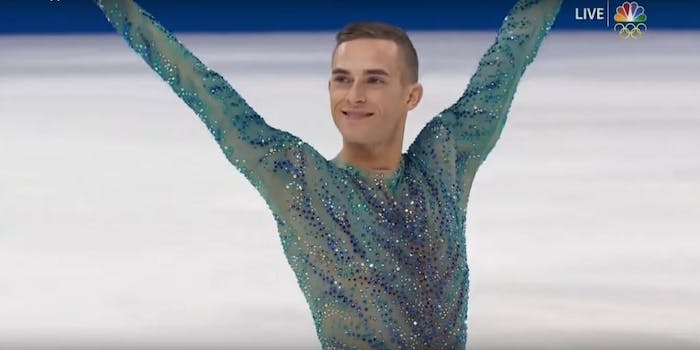 Can you blame her?

Academy Award winner Sally Field is on a mission for her son, director Sam Greisman. Specifically, Field is trying to set up her son with Adam Rippon, the virtuoso figure skater who’s been winning hearts throughout the 2018 Winter Olympics. But in doing so, she may have embarrassed Greisman just a little bit.

It’s easy to see why Field decided to give her son a helping hand. Aside from just being a caring mom, she could easily see her son’s been a fan of Rippon since the Winter Games began. Alongside American skier Gus Kenworthy, Rippon is one of the first openly gay male athletes in the U.S.’s Olympic history, a fact that he hasn’t shied away from throughout the Games. It’s clearly a quality that Greisman is appreciative of, having tweeted that he found Rippon’s example “very moving.”

Greisman is also gay, and in a text message to his mom, he must have made it pretty clear that he has a bit of a crush on the 28-year-old figure skater. Her response, which Greisman shared on Twitter, said it all.

Just some really helpful advice from my mom on how to deal with my Olympic crush. pic.twitter.com/shYCXwNOMf

Field went a step further that that, though. She also looped in Rippon’s Twitter account, quote-tweeting the screenshot of her text with Greisman and tagging his handle.

It’s fair to say that Gresiman sounded a little surprised by his mom’s bold introduction.

It remains to be seen whether Rippon will respond to Field’s very public matchmaking efforts, but given how busy he’s been, he could be forgiven for not keeping up with his Twitter mentions. Now that he’s wrapped up his full slate of events in Pyeongchang, he’s reportedly joining NBC as an Olympic commentator for the final stretch of the 2018 Winter Olympics. In other words, all those people who’ve already fallen for him will be hearing a lot more of his voice in the days to come.

Update 8:37am, Feb. 19: Rippon dispelled rumors he’d be joining NBC as a commentator, saying he was “flattered” by the opportunity but didn’t want to move out of the Olympic Village. And, since he found out about the offer via Twitter, it made sense for him to turn it down there too.

I am flattered that NBC wanted me to work as a correspondent for them here in PyeongChang. Doing this would require me to leave Team USA and move out of the Olympic Village. I don't want to do that so I had to declined the opportunity.

I love being on Team USA and representing our country. My teammates were there for me during my events, and now I NEED to be there for them. I look forward to being with them, and I’m very excited for the rest of the competition. Go Team USA!!!