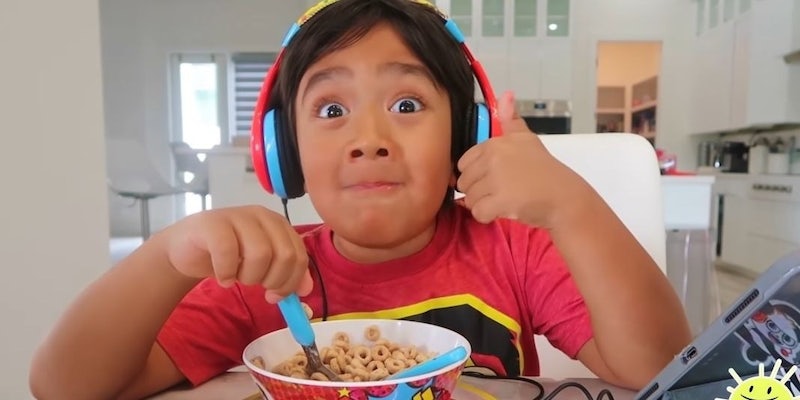 The family said they're not doing anything wrong.

The richest YouTuber of last year could face an investigation from the Federal Trade Commission (FTC) after being accused of steering his fans to buy toys that sponsor him without disclosing it, according to the Daily Mail.

Ryan ToysReview, which stars 7-year-old Ryan, made $22 million in 2018 thanks to his unboxing and toy review videos (and $11 million the year before). But a consumer watchdog group called Truth In Advertising made a complaint to the FTC and accused the channel of failing to disclose that some of the products he featured in his vlog paid him money.

Now, the Mail writes that the FTC might take a look at the complaint lodged against his parents, Shion and Loann Guan (Ryan is not named in the paperwork). In the complaint, Truth In Advertising wrote, “It is often difficult to discern the innocent (or sometimes not so innocent) antics in Ryan ToysReview videos from the sponsored content. And for preschoolers, it is impossible to discern the difference.”

Because of his immense popularity—the channel has 21 million subscribers—Ryan and Walmart are working together on a new line of toys, and he’s getting his own TV show on Nick Jr.

In March, YouTube was sued for “engaging in abusive advertising practices toward children” in regard to the numerous toy unboxing vlogs that litter the site.

“This content is unfair because it’s an ad disguised as a fun video, and the influencers are very, very good at making kids feel like they are watching the most fun toy out there,” Josh Golin, the executive director of nonprofit Campaign for a Commercial-Free Childhood, said in March. “It’s also deceptive to parents because they have zero understanding of what their kids are watching.”

Ryan’s family, however, said they’re not doing anything wrong.

“The well-being of our viewers is always the top priority for us, and we strictly follow all platforms’ terms of service and all existing laws and regulations, including advertising disclosure requirements,” the family said in a statement.