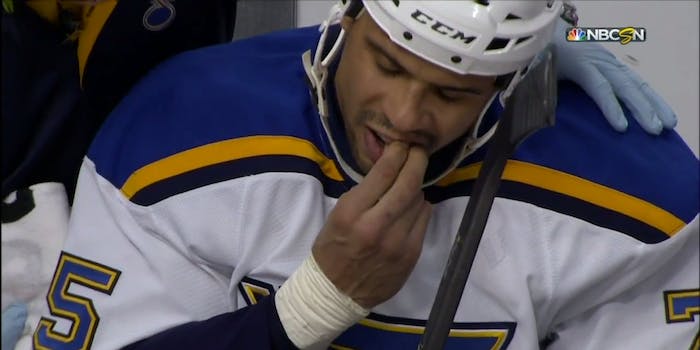 NHL player pulls out his own tooth after a big hit

Nothing's going to stop him—not even a missing tooth.

Hockey players are tough as nails. They can stay on the ice for most of a game, shake things off after a fist fight on the rink (and some time in the penalty box), return after getting an ear sewn back on to score the winning goal, and even self-perform emergency dental procedures.

St. Louis Blues forward Ryan Reaves transformed into an amateur dentist after he took a hit to the glass from Chicago Blackhawks defenseman Brent Seabrook during Sunday night’s matchup between the two Central Division rivals. He had a team staff member behind him in case he needed any help after he got to the bench, but the blunt force did most of the work.

Reaves got right back in the game when he returned to the ice, making his near-instant recovery even more impressive. The Blues ended up winning 2-1 to take first place in the division, so victory was so sweet it could give him a cavity. (If he can stop losing his teeth, that is.)