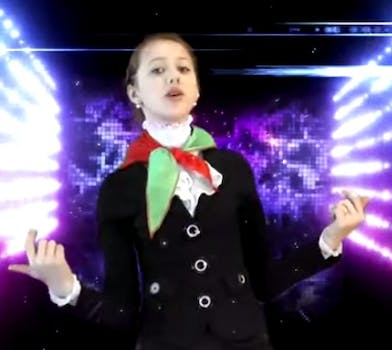 She's 13. She sings. She enchants her fans as much as her haters. Looks like Rebecca Black may have a Russian competitor.

Meet 13-year-old Ksenia Degelko, who in her quest to be the “Nicki Minaj of Belarus” instead became Russia’s Rebecca Black.

Unlike Miss Black though, Degelko does not sing about her friends, what to wear, or the days of the week. Rather, in Degelko’s breakout hit, called “I’m From a Village” (she’s from a village called Oktyabrsky), she sings about Belarusian pride and prosperity, free health care and education, and the banning of mini-skirts.

Lyrics, translated by Radio Free Europe, include lines like:

We’ll get phosphorus and potassium from our depths
So that the agrarian prospers.
Install modern amenities in our town

Build an ice palace in Oktyabrsky
For our young and brave hearts.

I love the motherland. I’m a leader!

Uploaded onto YouTube on April 16, one version of Degelko’s song has already been viewed more than 340,000 times and claimed the distinction of being the most viewed video in Russia for the last few days.

Degelko even trended on Twitter in Europe on April 17, according to Radio Free Europe.

According to YouTube statistics, Degelko’s song is the most popular among 24- to 54-year-old men, many of whom have proceeded to give her a tongue-lashing in the comments.

Commenters have taken to calling Degelko “trash” or writing the Russian equivalent of “fail.” A good number of the comments take issue with Degelko’s affiliation with the Belarusian Republic Pioneer Organization, a youth group operated by the local communist party. (Communist youth groups in former Soviet countries are no longer indoctrination camps, leaning more towards an American Scouts approach.)

“I am ashamed for my country,” wrote Lia Belova on YouTube (translated from Russia via Google Translate).

“Die,” wrote rastasnow1. “You do not have long to live on this planet.”

Other YouTubers have taken to chiding the haters, even calling them “jealous,”  but always pointing out Degelko is still a child. Some have taken to leaving encouraging comments too, like Ochevidec KMI, who wrote “Good for Xenia!”  (Xenia is an alternate spelling of Ksenia.)