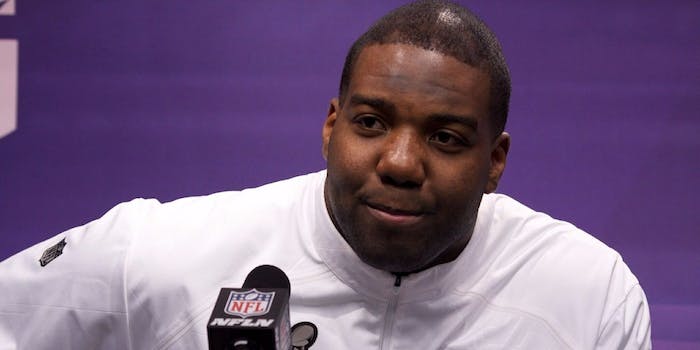 'What we have is strength in numbers.'

With the NFL embroiled in controversy—as some players continue to kneel during the national anthem and as Donald Trump continues to call for those players to be fired or suspended—an open letter published online by a San Diego Chargers offensive lineman is asking for unity among 1,700 of his colleagues.

In his letter published on the Players’ Tribune Friday, Russell Okung wrote “things have clearly gotten out of control” and called on NFL players to use their “strength in numbers” and to “be ready to respond with one voice as players.”

It’s a call to unity as the NFL reportedly is discussing a new mandate that would force all players to stand for the national anthem. Currently, there is no league rule for that, but the Trump administration is putting pressure on the league to force players to stand.

Last weekend, Vice President Mike Pence manufactured a controversy by leaving a game after more than two dozen San Francisco 49ers took a knee during the anthem, and President Donald Trump has been tweeting messages like this:

Why is the NFL getting massive tax breaks while at the same time disrespecting our Anthem, Flag and Country? Change tax law!

Very important that NFL players STAND tomorrow, and always, for the playing of our National Anthem. Respect our Flag and our Country!

As a result, NFL Commissioner Roger Goodell sent a letter this week to owners, saying he thinks everybody should stand for the anthem. “The current dispute over the national anthem is threatening to erode the unifying power of our game and is now dividing us, and our players, from many fans across the country,” he wrote.

Cowboys owner Jerry Jones, one of the most influential men in the league, has threatened that any Dallas player who protested during the anthem would be benched.

On Friday, during a teleconference, an NFL spokesman said there’s been “unprecedented dialogue” on the anthem issue between the league and the players’ union, and that though no formal rule proposal has been written that will be voted on during next week’s owners’ meetings, the controversy will be discussed.

Okung wants to make sure the players have a say, as well.

“By now you’ve likely read the commissioner’s letter addressed to NFL executives and have seen reports about the league’s upcoming meetings,” he wrote. “It occurs to me that any attempt to respond collectively as players is complicated by numerous challenges and that our options for speaking with one voice are limited. This means we can either wait until we receive our respective marching orders, speak up individually, or find a way to collaborate and exercise our agency as the lifeblood of the league.”

Okung wrote that he was initially skeptical of the merits and the strategy of Colin Kaepernick’s idea to kneel during the anthem at the beginning of the 2016 season. Now, he said he was mistaken.

“There is now no doubt in my mind that what he did last season was a courageous, prophetic, self-sacrificial act that has captivated a nation and inspired a powerful movement,” Okung wrote. “If I had his cellphone number, I would tell him that. As Kap’s message has now been distorted, co-opted, and used to further divide us along the very racial lines he was highlighting, we as players have a responsibility to come together and respond collectively.”

To do that, Okung said he wants to open a line of communication between all players, and to do so, he’s asking players to follow him on Twitter. Then, he’ll follow back and presumably begin a Twitter DM chain that would allow players to strategize and determine how to use one voice.

Wrote Okung: “I look forward to hearing from you on the president’s favorite medium.”