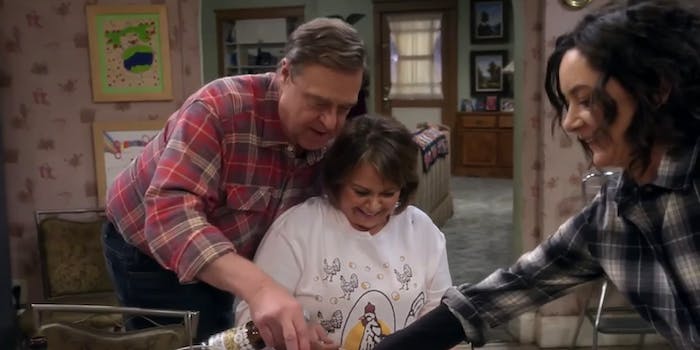 ‘Roseanne’ is getting an ABC spinoff—sans Roseanne

Instead of 'Roseanne,' we're getting 'The Conners.'

As soon as ABC canceled the reboot of Roseanne on the heels of a racist tweet from its star cast member, rumors of a spinoff proliferated. That spinoff—The Conners—is coming to ABC this fall, the network announced Thursday.

BuzzFeed News reports that the 10-episode series includes every character except for Roseanne Barr. “A sudden turn of events” (aka, a likely death) leaves the Conner family—including Darlene (Sara Gilbert), Dan (John Goodman), Jackie (Laurie Metcalf)—on their own.

Barr won’t be profiting from the spinoff, either. Tom Werner, who’s behind Roseanne’s production company Casey-Werner, said in a joint statement with Barr that they “reached an agreement that will allow Werner Entertainment to produce a spinoff of the Roseanne series for ABC without Barr’s further creative or financial participation.”

The cancelation of Roseanne, which at the time was TV’s No. 1 show, was a major loss for ABC. But the network was left with little choice after Barr tweeted to compare former Obama aide Valerie Jarrett to an “ape.”

CNN reports that in a statement Thursday, Barr expressed regret over her tweet that ABC at the time called “abhorrent.”

“I agreed to the settlement in order that 200 jobs of beloved cast and crew could be saved, and I wish the best for everyone involved,” Barr said.