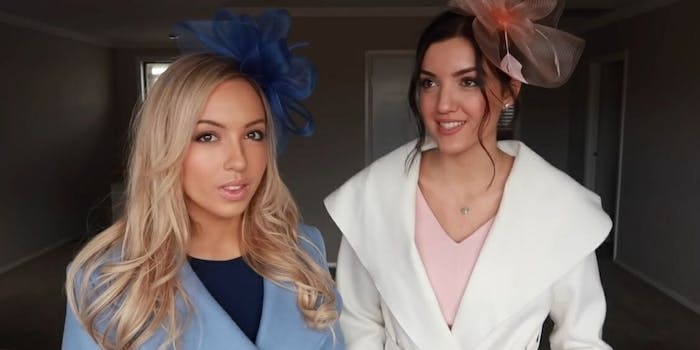 Australian YouTubers the Rose Sisters have accused a BuzzFeed channel with more than 3 million subscribers of plagiarizing their content.

According to Bianca Rose—who, along with her sibling Madeline, co-owns the Rose Sisters channel that had about 14,000 subscribers at the beginning of this week—BuzzFeed’s Ladylike channel basically took an idea from a 4-month-old Rose Sisters video and then repackaged it.

In a video titled “BUZZFEED CAUGHT STEALING AGAIN” that was published earlier this month, Biannca Rose said the incident is “something that’s been making my blood boil for the past 24 hours … Essentially, BuzzFeed stole my whole entire royal video that I made and uploaded almost four months ago. It is now October 2018 and … they uploaded literally the exact same video.”

BuzzFeed, though, has denied the accusation, and a spokesperson told the Daily Dot there are no plans to take down the Ladylike video.

The original Rose Sisters video showed the sisters following the rules of English royalty and acting like princesses for a day. That was on June 22, about a month after Meghan Markle married Prince Harry. The video, titled “We Became Royal Princesses For a Day,” garnered a little more than 2,000 pageviews by Monday.

On Oct. 5, BuzzFeed’s Ladylike published a vlog titled “We Follow Princess Rules For A Day” in which the creators said they would adhere to royal etiquette for the day. That video, as of this writing, had more than 1.2 million views.

The accusation video the Rose Sisters published earlier this month has garnered more than 180,000 views as of this writing after it took over the No. 1 spot on Reddit’s r/videos subreddit throughout much of Monday.

In the side-by-side comparison of the two videos, Biannca Rose showed similar camera shots that were used while the respective creators enjoy high tea. She also pointed out similar jokes used by both channels and similar ideas for how to act like royals for the day, and the video showed nearly identical shots where women on both channels are pulling on pantyhose.

“The whole production of this video is just copied,” Biannca Rose said.

Rose was clearly bothered by how both channels produced their high tea spots—including using the word “delightful” to describe the hot drink and how both sets of YouTubers walked down the stairs as the royal family would.

“Down to the music, the slow-mo shots, the close-up shots, the actual … everything about this bloody tea has been ripped from our video,” Bianca Rose said. “If they don’t directly say it, they put it in a subtitle. My sister literally said everything they put in the title.”

There are, however, plenty of differences between the two videos, particularly since Ladylike had another YouTuber to play the role of queen while the Rose Sisters didn’t take that approach.

A BuzzFeed spokesperson told the Daily Dot that the inspiration for the Ladylike video came from a BuzzFeed post in May that was titled “Here’s A List Of All The Things Meghan Markle Can’t Do Now That She’s A Royal Duchess” and this YouTube video from BuzzFeed’s As/Is channel that showed Sarah Burton imitating Markle’s pre-wedding rituals.

Madeline Rose told the Daily Dot that they emailed BuzzFeed a few weeks ago but that the media company denied the copyright claim. She said they hadn’t been in contact with BuzzFeed since but that it was “crazy seeing it blow up” on social media on Monday.

Others, though, weren’t surprised at the accusations levied at Ladylike, which was nominated at Monday’s Streamy Awards show for best ensemble cast.

The ladies that stole Biannca and Maddy’s content should take it down & apologize. The similarities are too many to claim it not to be copied. @BuzzFeed make it right https://t.co/HlUXCBCmiz

In October 2017, BuzzFeed denied Jaclyn Glenn’s accusation of video plagiarism at length in this Medium post.

Though Biannca Rose declared that Ladylike’s video was “complete and utter plagiarism,” it seems likely this controversy will die down soon enough. Ladylike will keep the video on YouTube, and the Rose sisters will enjoy plenty of new pageviews and subscribers because of the controversy. And those who believe Ladylike plagiarizes videos from smaller YouTubers will continue to be on the sharp lookout for even more evidence.