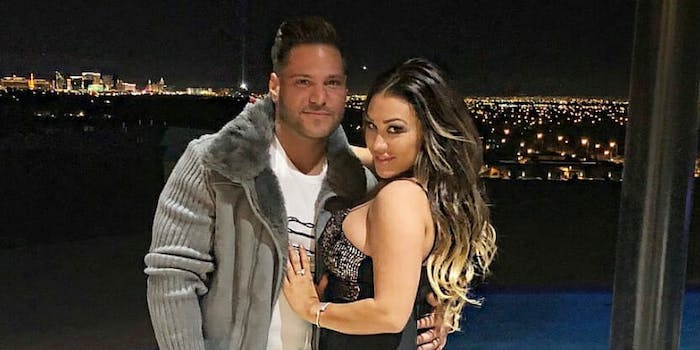 Jersey Shore star Ronnie Ortiz-Magro was seen spending time with Jen Harley, the mother of his 3-month-old daughter, just over a week after Harley allegedly “dragged” Ortiz-Magro with her car, TMZ reports.

Although the two reportedly spent time together this week, including Independence Day on Wednesday, they are not building toward a relationship again but rather focused on co-parenting, according to TMZ.

Ortiz-Magro and Harley have shared a publicly turbulent relationship for over a year and officially ended things in April, Cosmopolitan reports. Ortiz-Magro was allegedly kicked out of their house two weeks prior to a brutal argument on Instagram live. Tempers flared after Ortiz-Magro accused Harley of cheating on him and harboring sexual videos of her ex.

On June 24, things seemed reach a new level of hostility after a violent confrontation resulted in blood streaks on both the interior and exterior of Harley’s vehicle. They were on their way home from a BBQ when Harley allegedly punched Ortiz-Magro in the face and dragged him alongside the car after he tried to get out. Their daughter was in the car during the fight, and Harley drove over the median upon acceleration causing a flat tire, TMZ reports.

Harley will not face charges over the bloody incident, according to Newsweek. Both parties seem to be trying to sort their differences in a cordial manner after spending the week together without any major issues. They are reportedly pursuing a 50/50 child custody agreement.