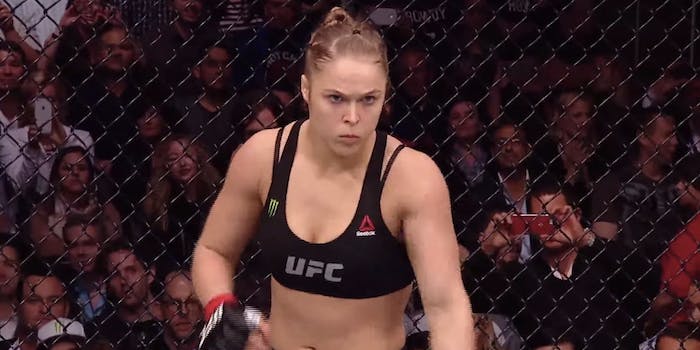 The only surprising thing about this parody is that it took this long for somebody to think of it.

As per usual, Ronda Rousey stepped into a UFC cage on Saturday and dominated an opponent, defeating Bethe Correia just a few days after Rousey declared that she wasn’t a “do-nothing bitch” and proclaimed that she loves her body.

That’s evidenced by the Instagram account of Kleio Valentien, in which she reveals that she’s playing Rousey in Ronda ArouseMe: Grounded and Pounded.

Along with Valentien is Sammie Sixx, who’s playing Miesha Taint, an obvious takeoff on UFC fighter Miesha Tate—who actually appears in line to get a third chance to beat Rousey.

As film director Joanna Angel explains in the interview below, she became a Rousey fan after she first watched her fight. And Angel has helped create some new moves for the film.

“We changed the ‘armbar’ to a ‘dickbar,'” Angel told TMZ Sports. “One of the guys in the film, Ronda’s trainer, his name is Derek Pierce and he knows a lot about fighting. Derek choreographed a bunch of fight moves and used a lot of Ronda’s moves and incorporated that into the movie. And all the fight moves led into sex scenes. …But Miesha Taint had a special right cross c**t punch. We had a lot of fun with it. Kleio Valentien, she looks so beautiful and really does have a lot of similarities as Ronda.”

It appears Valentien also happens to be a fan of Rousey. Either that, or she knows a Rousey loss might not be great for business.

No word yet on how Rousey or Tate feel about the upcoming parody.