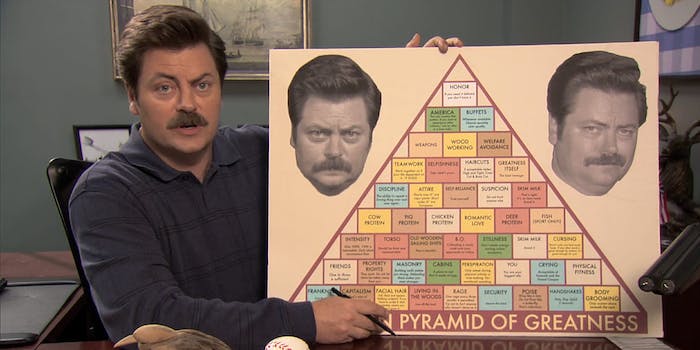 FCC Chairman Ajit Pai is currently closing in on a victory that will gut net neutrality rules.

The former Verizon lawyer is also a Parks and Recreation fan, the wonderfully quirky comedy from Amy Poehler. So much so that Pai reportedly keeps a framed copy of Ron Swanson’s “Pyramid of Greatness” at work. But because Pai’s mission is unpopular with the American public, as a repeal of net neutrality opens the door for internet-service providers to carve up the web, Swanson actor Nick Offerman took issue with Pai late Wednesday.

“I’m flattered that my pyramid of greatness has inspired you. I will remind you that the top category is Honor,” Offerman wrote on Twitter. “I feel you may need that term defined. Which means, of course, that you don’t have it.”

Dear @AjitPaiFCC , I noticed your Pyramid of Greatness and thought it felt strange in your office, given your stance. So I went to see Ron Swanson to ask if he’d care to weigh in & he dictated the below to me 🇺🇸 pic.twitter.com/ZHFrc4Vevf

Amid Democrats calling for an investigation of the widespread fake online comments in support of Pai’s plan, former FCC Chair Tom Wheeler calling it an “abomination,” and protests on Wednesday at Verizon stores, Offerman’s outrage may cut Pai the deepest.