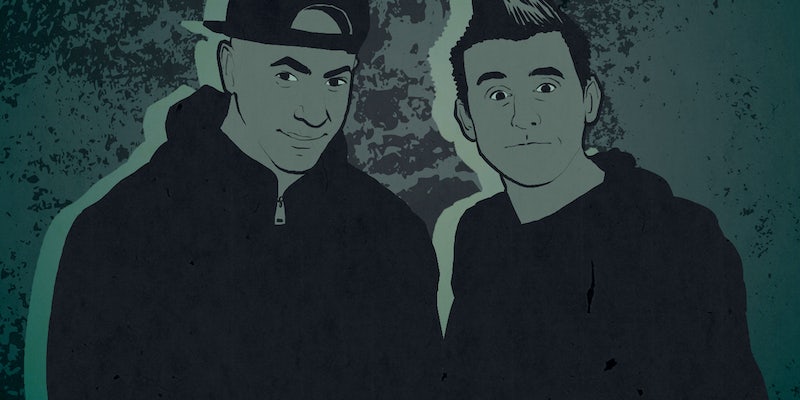 YouTube pranksters Roman Atwood and FouseyTube take to the stage

And in the red corner…

The crowd erupted in chants, standing on their chairs to get a better view of the contenders, cloaked in different colored robes on opposite sides of the venue, bouncing and ready to face off.

It may have felt like a boxing match, but Saturday’s event at the Ace Hotel Theatre in Los Angeles was a battle of heavyweights of a different variety: two YouTube pranksters at the top of their game.

Yousef Saleh Erakat, better known as FouseyTube, and Roman Atwood joined forces for a short, five-city tour that brought their individual brands of pranking and vlogging off the YouTube screen and into theaters for their legions of fans. Between them, they command a subscriber base of 25 million, making their tour one of the most statistically powerful of the recent set of YouTubers making the leap off screens and into packed theaters. (Erakat and Atwood will broaden their appeal even more in the coming months, with Atwood’s Natural Born Pranksters film hitting theaters in April and Erakat picking up a role in Tyler Perry’s forthcoming A Madea Halloween.)

A testament to their mostly young and mostly male fanbase, the event felt vastly different from other tour attempts by fellow YouTubers, catering to a combative atmosphere that included a scoreboard keeping track of points scored for tasks completed, good jokes executed, and other, completely arbitrary reason.

The fans fit right in with the boxing theme, shouting for their favorite star each time he spoke. Some were undoubtedly fans of both, but there was a sense of taking a side, at least for one night, for which star they generally preferred in the world of YouTube pranking. Erakat and Atwood emphasized that battle with a fake force field keeping them separate on stage for most of the night as they vied against each other in various challenges.

Despite these attempts at a theme, the show itself could have used polish. While the battle premise has promise, the flow of the show was marred by a lack of momentum and some technical glitches. Both stars took time to invite fans on stage for bits with varying degrees of success, from a failed rap battle moment to a live head-shaving while the duo fielded audience questions. That said, the crowd seemed just happy to scream their adoration in the presence of their idols, not engage in an actual performance. When one girl in the front row kept falling into histrionics, Erakat joked that she was at the wrong place, that he was not Zayn Malik, but “another brown person.” Breathless fans jumped from their seats only to plug their brother’s barber shop or ask “where’s the afterparty?” to which Fousey replied, “that’s a bad question.” Atwood and Erakat’s willingness to tell their audience to calm down or to think harder was the most refreshing aspect of the show.

Not that they did calm down much. During an unnecessary 15-minute intermission, the aisles flooded beyond fire safety standards as fans tried to snap selfies with the famous faces who were just trying to enjoy the show from the audience. Stars like Lilly Singh and sWooZie seemed unfazed by the masses surrounding them as the venue security tried to restore order.

While pranksters on YouTube get a bad rap for setting poor examples, Atwood and Erakat made strides to define themselves as something more.

As the actual show resumed, the audience kept that manic energy, which only subsided when Atwood and Fousey each took to the stage to give inspirational speeches about their lives and careers. While pranksters on YouTube get a bad rap for setting poor examples and creating harmful content, Atwood and Erakat made strides with their speeches to define themselves as something more: The audience roared as Atwood explained the hardships in his life that led him, piece by piece, to his successful career, and Erakat shared personal stories about his insecurities as a creator and a person. Their divergent backgrounds, with Atwood from humble Ohio beginnings and Erakat being of Palestinian heritage, shed light on a diverse cross-section of experiences that touch a wide swath of YouTube viewers. It was the only time the crowd felt palpably silent the whole night—even if only for moments at a time.

The segment ended with the two men breaking down the fictional barrier that kept them on separate sides during the show and embracing… only for Erakat to turn it into a headlock and lead them back into a battle of one-upmanship. After more rounds of arm-wrestling and rap-battling, the meaningless scoreboard ultimately declared Atwood the night’s winner.

The fans, however, didn’t really care about a winner in this fight, only that they got two and a half hours in the presence of their favorite stars without screens between them. But as they poured out to the downtown streets after the house lights went up, fingers flying across mobile devices, sharing their selfies and stage shots and reactions, the IRL moment faded into a digital one after all—until the next time.