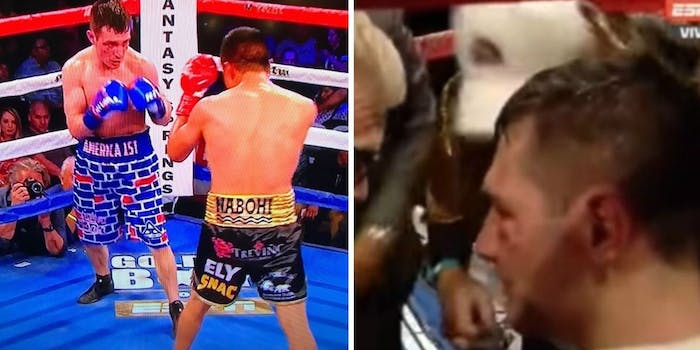 For one of the most important boxing matches of his life on national TV, Rod Salka made quite a fashion statement, wearing “America border wall”-themed trunks to the ring on Thursday night. Francisco Vargas, a native of Mexico City, responded with his own statement, knocking Salka to his knees in the fifth round and forcing the referee to stop the fight after the sixth.

Rod Salka wore “America 1st” and a wall pattern on his trunks against Mexican fighter Francisco Vargas, and ended up getting his ass kicked #boxing pic.twitter.com/CmNfIeU6X1

Salka is a Republican who ran for a Pennsylvania House of Representatives seat in 2016—he also got wiped out in that matchup, losing by 32 points—but he’s most known for being a decent though not great boxer.

He went viral late Thursday night because he wore trunks with “America 1st” on the waistband and what looked to be a brick wall pattern on the rest of the fabric. Salka seemed to be paying tribute to Donald Trump’s idea that building a wall on the Mexican border would make America great again.

Vargas, one of the world’s best fighters in the 130-pound junior lightweight division who has been in two nationally recognized Fights of the Year, blasted Salka throughout.

Salka wore the build the wall trunks AND he paid for it.

Her: Wear something nice for your big ESPN date tonight. Boxing shorts can have style, you know.

That last tweet was the end of his 2014 fight vs. Danny Garcia, when Salka got destroyed in their junior welterweight matchup.

After the fight, Vargas wasn’t asked on TV about Salka’s trunks, so we don’t know exactly how he felt about his opponent’s political statement. But then again, Vargas said it all by knocking over the man representing Trump’s wall.