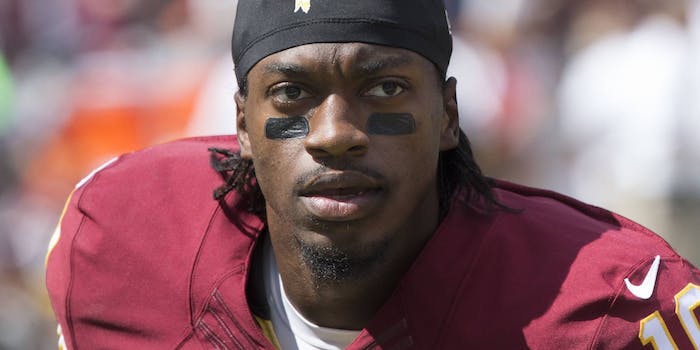 He also cropped out logos on the bottom of the graphic.

The Cleveland Cavaliers won the NBA Championship Sunday night, ending Cleveland’s 52-year drought of professional sports victories. But there’s one thing the team had stolen from them: New Browns quarterback Robert Griffin III ripped off a Cavaliers graphic while trying to congratulate the team and claimed it as his own.

Griffin is one of the latest editions to the Browns, a team that appears to be especially cursed, even for Cleveland. In an attempt to embrace his new city, he tweeted out his congratulations to the Cavaliers Monday morning. He (or whoever runs his social media accounts) grabbed a graphic being widely shared online and posted it.

At first glance, you might not notice anything off about it. But in the bottom left corner of the photo is a message of copyright: “© 2016 Robert Griffin III.” And in an even bigger social media faux pas, Griffin’s tweet cropped out the logos in the original poster, one featuring the Cavaliers’s logo and Twitter handle and the other “All In 216.”

A few hours after posting it, Joe Caione, a web designer for the Cavaliers, called Griffin out for cropping out the logos and putting his name on it.

I'm glad you like the graphic but you didn't have to cut @Cavs off & slap your name on it. GFX like that take a ton of time to make.

Some of Griffin’s fans took to ribbing on him for stealing a Cavaliers graphic and trying to claim copyright on it, but they quickly surmised that it might’ve been done through a service like WhoSay, which allows celebrities to claim copyright on the photos they post online. Griffin does have a WhoSay account with the Cavaliers graphic being the most recent post—and it turns out that he has a history of posting photos to WhoSay that will put his copyright claim on it.

Nice copyright, looks like you worked very hard on this, Robert.

seriously. that's up there with the old ESPN LEGAL NOTICE: pic.twitter.com/rr4w47OKmg

In the end, whoever does his Twitter steals wire photos and does the same w/those. pic.twitter.com/lWzjdw4Gm0

Griffin has yet to respond to the criticism, but if he does, chances are he might try to blame it on the intern again.