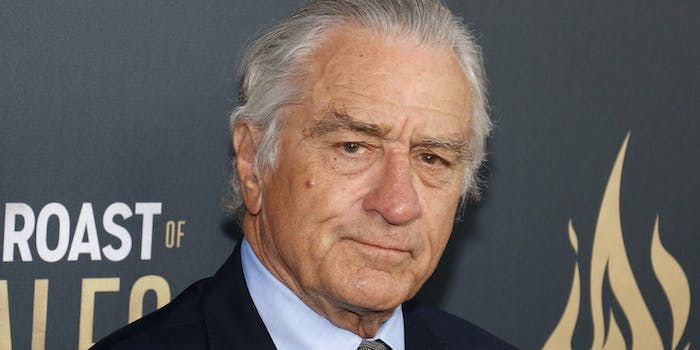 The former VP alleges a litany of workplace violations.

Graham Chase Robinson, the former vice president of production and finance at Robert De Niro’s Canal Productions, made headlines earlier this year when the company sued her for $6 million for allegedly embezzling money and binge-watching 55 episodes of Friends on the clock, among other offenses. But the story of the Netflix binge-watching assistant is more complicated than we thought.

Robinson has filed a complaint of her own in which she accuses De Niro of repeated unwanted physical contact and verbal abuse, according to Hollywood Reporter. In addition to various instances of unwanted touching on De Niro’s part, she says he also “stood idly by while his friend slapped [her] on the buttocks.”

“He does not accept the idea that men should treat women as equals,” the complaint alleges. “He does not care that gender discrimination in the workplace violates the law. Ms. Robinson is a casualty of this attitude.”

In addition to the physical component of the complaint, Robinson also alleges verbal abuse. She claims De Niro called her a “bitch,” a “brat,” and “would joke with Ms. Robinson about his Viagra prescription” in front of her. The complaint also alleges that “De Niro suggested that Ms. Robinson could get pregnant using sperm from her (married) male co-worker.”

In terms of their workplace relationship, Robinson says De Niro treated her as the “office wife,” giving her menial duties and paying her less than her peers. She claims that her attempts to leave Canal were blocked by a combination of threats and empty promises.

The complaint also addresses the Netflix-binging accusations that went viral:

De Niro took a page out of the Bill O’Reilly playbook. Before Ms. Robinson could sue, De Niro retaliated… The lawsuit is replete with ‘clickbait’ allegations that falsely characterize Ms. Robinson as a loafer, a thief, and a miscreant. Now, when her name is Googled, these allegations pop up on the screen. The results have been devastating to Ms. Robinson. Her reputation and her career have been destroyed.

Robinson claims gender discrimination, retaliation, violation of the Equal Pay Act, and various other state and federal labor laws. She seeks at least $12 million in damages. Here’s the full complaint.

De Niro’s attorney, Tom Harvey, responded to the lawsuit in a statement to the Daily Dot: “The allegations made by Graham Chase Robinson against Robert De Niro are beyond absurd.”

This story has been updated to include a statement from De Niro’s attorney.