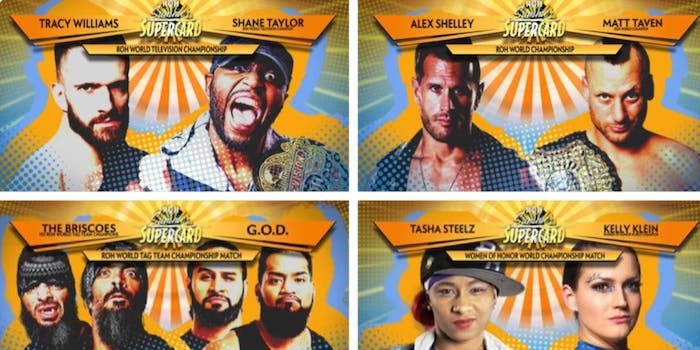 How to stream Ring of Honor’s Summer Supercard

In Friday's Summer Supercard, Ring of Honor, CMLL, and NJPW wrestlers will combine to wage all-out war on each other.

What’s better than live streaming one wrestling promotion’s PPV for cheap? How about three different wrestling promotions from around the globe, competing on one card, available to watch online for less than $10? That’s what the Summer Supercard event on Friday night is all about. It’ll feature wrestlers from U.S. promotion Ring of Honor (ROH), Mexico’s Consejo Mundial de Lucha Libre (CMLL), and New Japan Pro Wrestling (NJPW), and you can stream the entire PPV on either Fite TV or via ROH’s Honor Club.

Matt Taven is one of the most impressive champions in ROH history, winning the title at the G1 Supercard event in Madison Square Garden in April, and he’s defended it ever since. (He later threw out the first pitch before a Boston Red Sox game, fulfilling a childhood dream.) He’s pissed off just about every fan he’s come across with his heel persona, so it seems likely most fans will be rooting for Alex Shelley to beat him and to take his title at Summer Supercard.

“Let people hate me all they want,” said Taven, who’s coming of a victory vs. Jay Lethal and Kenny King at Manhattan Mayhem. As he recently told Sporting News, “It works. To me, I’m just myself. I’m having a great time. I wanted to be a wrestler since I was six years old. I’m the Ring of Honor World Champion right now. How am I not ecstatic?”

ROH world television champion Shane Taylor will defend his strap vs. “Hot Sauce” Tracy Williams, while ROH tag team champs the Briscoes will meet Guerillas of Destiny (G.O.D.) in what has become an intense feud and which will culminate in a ladder wars match. G.O.D., who wrestle in ROH and NJPW, won the ROH tag titles (and retained their IWGP tag titles from NJPW) during a fatal four-way match in March, but at ROH’s Manhattan Mayhem show in July, the Briscoes got their revenge and won back the ROH belts.

Originally, there was supposed to be a fourth promotion involved in Summer Supercard. But the National Wrestling Alliance (NWA) ended its relationship with ROH a few weeks ago, meaning a scheduled match between NWA world heavyweight champion Nick Aldis vs. a member of Villains Enterprises has been scuttled from the card.

Here’s everything you need to know to watch the Summer Supercard live stream.

The best way to watch these international wrestlers compete on Summer Supercard is through Fite TV.

Since it’s a PPV, there’s no legal way to get around the $9.99 fee to watch the card. But Fite TV (you can sign up here) has you covered. Fite TV is available on services like Roku, Apple TV, Amazon Fire Stick, PlayStation 4, Xbox One, Android and iOS devices, desktop and laptop computers, and smart TVs.